I must admit I'm very "picky" when it comes to current designers, I search for the following always: retro inspired pieces, originality, elegance & classicism, and quality. Below an outfit from Roberto Cavalli's SS 2005 or 2006 collection which became a favorite back in the day. Ideal for a party this summer whether it is at the club or a nice terrace.

The jacket appears to be a safari jacket, yet to give it a more formal approach I'd recommend wearing a white sports jacket. This outfit is so versatile because you can wear it two times...one with the jacket, and the other just with the shirt and trousers (think David Backham in a previous post).

I like the sunglasses, yet only for daytime ;) Even though the shoes aren't visible I'd opt for the following, depending on the ocassion of course, dark blue loafers/mocassins or boat shoes (Gorgeous Styles has a couple of recent posts dedicated to this shoe style). White shoes may make the outfit seem a bit too matchy.

The cloth belt is a very original piece and the way it's worn is too. The fact the trousers show a bit of the upper ankle is very trendy this summer, yet I think it's always been in the Mediterranean. 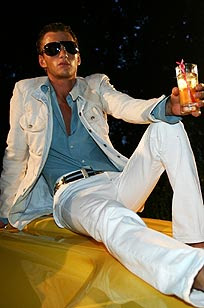 Photo: Flickr
Posted by RetroVintageModStyle at 6:46 AM No comments:

So we're officially in "Prom Season" and well this time I've decided to look back on the 70s Prom look. Okay it probably is a smoking we wouldn't wear today but back then it was worn by everyone. In the late 60s and 70s the smoking suffered modifications in the size of the bowtie and the addition of frills to the shirt. The size of the bowtie doesn't concern me at all, however I'm not a big fan of the frills.

And well this wasn't worn only to Proms, it was worn to every big celebration in the 70s, if not just check your family albums. 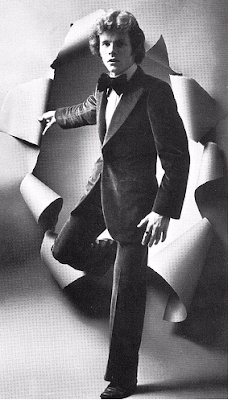 Posted by RetroVintageModStyle at 9:38 AM No comments:

One of the current menswear brands that usually grabs my attention due to it's detailed prints and 70s retro vibe is Etro. Considered by some loud and bold; and by other funky and stylish, I consider it stylish and retro. Below is an ensemble that made me an Etro "fan" and if I'm not mistaken is from their SS08 collection.

Ideal to be worn at the beach, the pool, to stroll around on holiday or attend a summer garden party. The shirt has a paisley print, the belt is woven (probably a Native American craft), the shades are aviators (classic and back in style), the shoes appear to be mocassins (although they can be replaced by sandals or boat shoes). I'll probably remove the hand bag, but it's up to you. 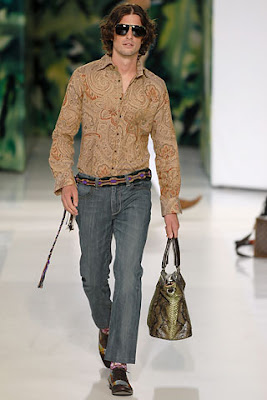 Photo: Menstyle.com
Posted by RetroVintageModStyle at 1:00 PM No comments:

This weekend the 67th F1 Monaco Grand Prix will be held in the streets of Monaco amongst the presence of enthusiastic F1 fans, celebrities attending the Cannes Film Festival's festivities in the French Riviera, and Monaco's Princely family.

Whether the fact that it's the only Grand Prix circuit that runs through city streets in the world (one can appreciate the beautiful landmarks of Monte Carlo during the race) or those attending it and the media coverage, the Monaco Grand Prix is probably the most famous Grand Prix.

F1 pilots like Jackie Stewart, Ayrton Senna, Michael Schumacher, Fernando Alonso, David Coulthard, and many others have won this race.

Below is a video from Robbie Williams (the song in my opinion isn't that great) that tries to recreate F1 Grand Prix racing circa 1966-1967. Original footage from those years can be seen and also Jackie Stewart. The video's plot is a bit similar to the 1966 movie "Grand Prix" with Yves Montand.

Rick Springfield, famous in the 80s for hits like "Jesee's Girl" and "Don't Talk To Strangers", looking stylish during a performance in 1982. His outfit is a brilliant example of 80s menswear at it's best, despite the 80s being considered by many as the worst decade in fashion. It's an outfit similar to what Simon Le Bon from Duran Duran wore back in the day. I really like the color coordination in this one, the skinny tie is what makes it stand out. 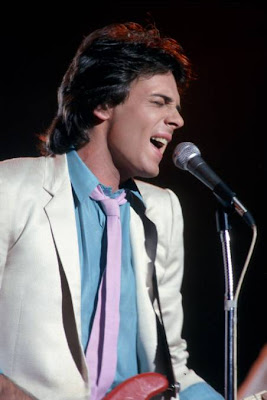 Photo: Flickr
Posted by RetroVintageModStyle at 12:26 AM No comments:

The Cannes Film Festival is taking place during these days. Throughout its existence it has been, one, if not the most famous film festival in the world due to three things in my opinion: the films shown, Cannes and the French Riviera's settings, and those who attend it. Looking back at the festival's history one can definetly see an evolution of fashion portrayed by some of the most talented and stylish actors.
Below we have Alain Delon (like Michael Caine another regular in this blog) attending the festival circa 1960 (the exact date escapes my mind) with his then girlfriend, fellow actress Romy Schneider (Sissi, La Piscine).
Both are wearing color coordinated white outfits that are ideal for a summer brunch. Delon's ensemble is classic and I like the floral touch he added to it.
And speaking of Alain Delon, in one of this blog's first posts I recommend watching his 1960 film "A Plein Soleil", the original version of "The Talented Mr. Ripley", well I recommend it again...it's the ultimate early 60s Italian menswear film. Great ideas for this summer.
If I'm not mistaken in this blog's first post you can see some photos from actors attending Cannes in the 60s and 70s. 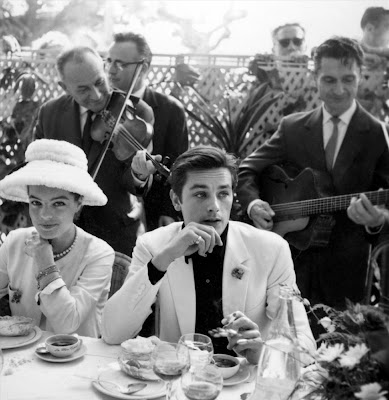 Photo: Tout Le Cine
Posted by RetroVintageModStyle at 7:33 AM No comments:

To add some color to your clothes this summer, a print/pattern shirt in warm colors like the one shown below is the best option. It appears that the model is wearing matching shirt and trousers, I'd say just wear each separately to avoid making a bold impression. 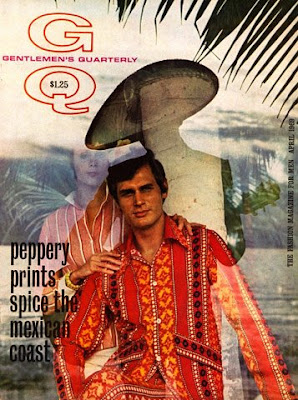 Photo: GQ
Posted by RetroVintageModStyle at 2:32 AM No comments:

Gunter Sachs, was one of the most famous and stylish men in Europe during the 60s and 70s. He is shown in this photo with his wife back then, the legendary Brigitte Bardot during a holiday in St. Tropez. Sachs is wearing a monocromatic all white outfit, yet fresh and ideal for summer, with some dark shoes, without socks (very Italian). Thr trousers seem to be a bit high waisted.

I guess most of the summer outfits I've posted lately are white, but it's the time of the year to wear light and bright colors, leave the dark colors for fall/winter; although sometimes a touch of black is not bad. 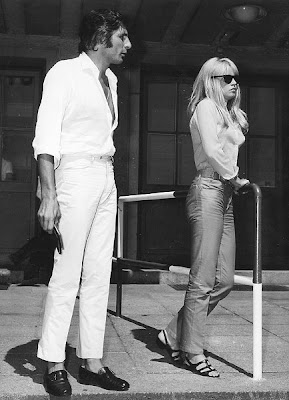 Jamiroquai's, Jay Kay, is one of today's most stylish performers. Although he hasn't released any new material lately, since he began appearing on the music scene he's been kind of fashion icon. He got lots of notoriety, besides the group's awesome music, due to his amazing headpieces and hats. In the early years of the 00s the world was able to see a stylish and very retro inspired Jay Kay. A proof of this can be seen in the following videos.
In 2002 Jamiroquai released the fabulous video "Love Foolosophy"...the models, Heidi Klum, the clothes, the car, the pool...what else could you ask for. Below is the version of the video that was released and an alternate version, both worth watching.

From the same album as "Love Foolosophy", we have the disco inspired video "Little L" from 2001.

In 2006 Jamiroquai released its last single till date called "Runaway", on it we can see a minimalistic and very stylish Jay Kay.


Source: Youtube
Posted by RetroVintageModStyle at 12:23 AM No comments:

Luis Medina Abascal is one of the most stylish men in Spain nowadays, and a proof of this is the photo below. He's wearing a velvet jacket paired up with a dark turtleneck, matching trousers, and an original hankerchief. Defintely a very 60s Mod inspired and stylish outfit. 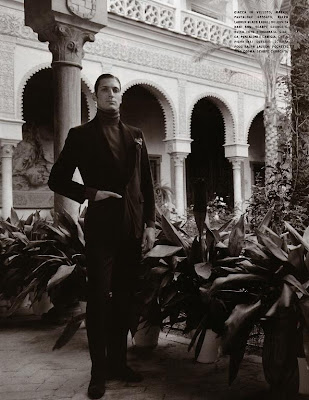 Posted by RetroVintageModStyle at 12:12 AM No comments:

John Lennon & Paul Mc Cartney were photographed by David Bailey in the mid 60s donning sleek black suits with white shirts and black ties. The Beatles were trendsetters in the 60s and exporters of the fashion trends in the UK during those years to the world. 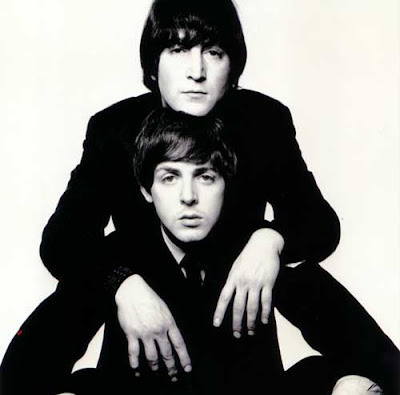 Bellbottoms are an iconic menswear item of the 70s since these style of trousers was worn by pretty much everyone during the decade. Although they made a comeback in mid 90s - early 00s, they only made it for women. Below a photo that depicts them during their boom circa 1974-1976. What's interesting of this image is the fact it shows how people listened to a music album for the first time, an image that can't be totally recreated nowadays. 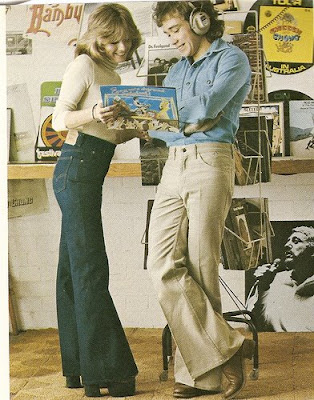