And the Oscar goes to...Colin Firth and "The King's Speech"

2011's Oscars were a night full of surprises; with flashbacks to Oscar and cinema history, a tribute to Kirk Douglas and Bob Hope, and the traditional Memorial to the beat of "Smile" remembering the likes of Dennis Hopper, Blake Edwards, Tony Curtis, & John Barry. Yet it was an unforgettable night for Colin Firth and "The King's Speech". 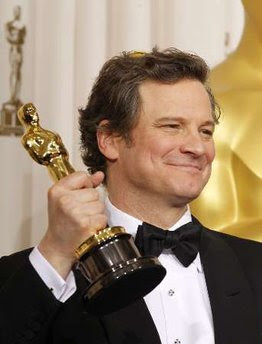 Firth won the Oscar for "Best Actor in a Lead Role" thanks to his impressive portrayal of King George VI on "The King's Speech". This film which tells the story of King George VI's stuttering problem and how he overcame it with the help of a speech therapist, Dr. Lionel Logue. The plot begins in the mid 20s when The King was Prince Albert, the Duke of York; and then takes the viewer to his Coronation after his brother King Edward VIII (later the Duke of Windsor) abdicated up till the crucial and historic moment when King George VI delivers his speech to declare war with Germany in 1939 at the start of WWII. 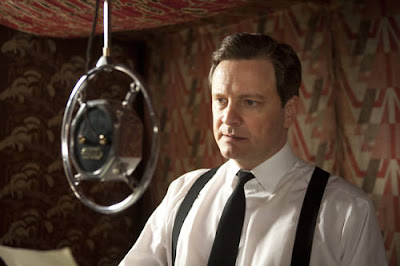 Colin Firth was also nominated last year for the acclaimed Tom Ford (who designed his tuxedo this year) film "A Single Man".

I definetly recommend you watch "The King's Speech" and "A Single Man" since they're two of the best films Colin Firth has ever made.

The 83rd Academy Awards will be held this Sunday February 27, 2011. Remembering a bit of Oscar history brings us to this photo taken at the rehearsal for the 30th Academy Awards in 1958.
A photo that is somehow special due to the Hollywood and World Cinema icons on it: Gregory Peck, Paul Newman & Joanne Woodward, Sophia Loren, Doris Day, Cary Grant, and even a former US President, Ronald Reagan. 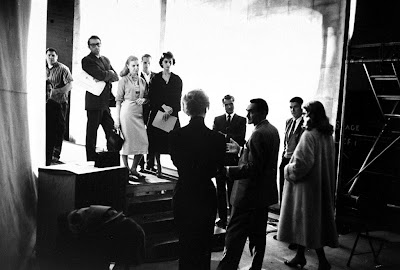 Brian Jones was definetly a "style khameleon" and one of the best dressed in the 60s. From his simple turtlenecks and striped jerseys to his eye catching print & paisley shirts, ethnic inspired clothes, and double breasted suits; this founding member of The Rolling Stones had a big influence on fashion.
Below a photo of Brian wearing his famous pinstripe suit which has a very British color combination: red, blue, and white; paired with a matching polka dot tie and pocket square. An ensemble that blends classic elegance with 60s Mod culture. 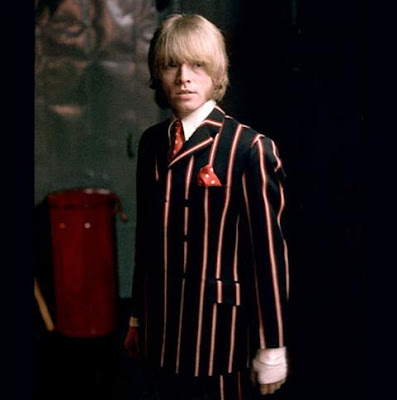 Photo: Flickr
Posted by RetroVintageModStyle at 12:26 AM No comments:

Michael Caine: The Importance of Eyewear

Michael Caine became a style icon in the 60s due to the outstanding suits and jackets he wore on films and in his everyday life. Yet it wasn't only the clothes that set him apart from the rest, it was his eyeglasses. Bold and black framed eyewear from Oliver Goldsmith became Michael Caine's style trademark.

When wearing/buying eyewear, one should always see if the frames' design suit your face shape well. Michael Caine was completly aware of this and hence the result in this 1966 photo. 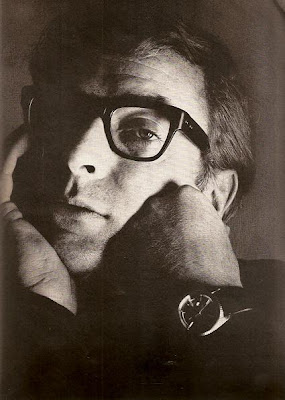 French photographer Francois-Marie Banier photographed his friend Yves Saint Laurent in the mid-late 90s. The result was not only a portrait that reflects the timeless and iconic elegance of Saint Laurent, but a portrait that was "scribbled" on that is reminiscent of the works of Jean-Michel Basquiat.
Banier is widely known for his portraits of other fashion designers, actors & actresses, and ordinary people. 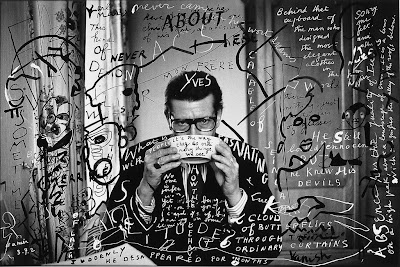 Photo: Flickr/Francois-Marie Banier
Posted by RetroVintageModStyle at 12:02 AM No comments:

The Velvet Underground was one of the most iconic rock bands of the late 60s. Based in New York City and managed by Andy Warhol, the band's first line up was formed by Lou Reed, John Cale, Sterling Morrison, and Maureen Tucker.

A musical staple at parties held at Warhol's Factory and the Exploding Plastic Inevitable events. In 1967 German singer Nico (who had a small role near the end of Fellini's "La Dolce Vita") joined the band (for their debut album only) after it was suggested by Andy Warhol.

Their debut album "The Velvet Underground & Nico" is one of the most popular in music history due to its Warhol cover art which features a banana.

By 1970 the band had undergone many changes; Warhol had stopped managing the band in 1968; Nico, Lou Reed, and John Cale were no longer band members. The Velvet Undergound stepped away in 1973 and made some brief comebacks during the 90s. 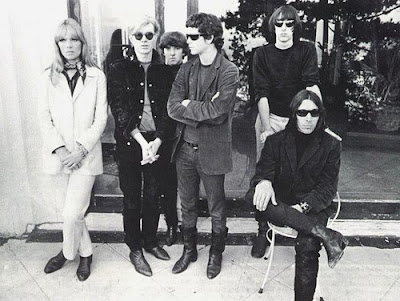 Alain Delon & Romy Schneider posed for this photograph circa 1960 when they were reportedly engaged. During this time Delon was promoting "A Plein Soleil", one of his most famous films. Romy Schneider had an uncredited appearance at the beginning of this film.

After ending their relationship a few years later, they both continued being friends and co-starred in films such as "La Piscine" and "The Assasination of Trotsky". 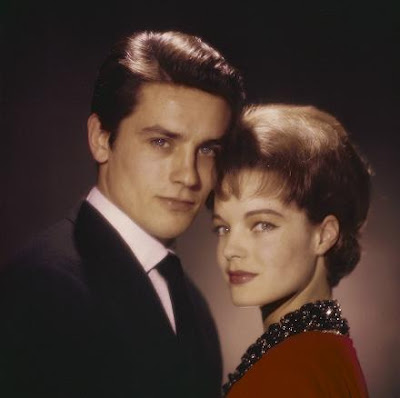 John F. Kennedy Jr. and his wife Carolyn Bessette defined American fashion and style in the late 90s. Opting for classic, simple, and minimalistic pieces; they were the perfect example of "less is more". Whether it was to attend a dinner or enjoy a relaxing weekend, John & Caroyln were always dressed appropiately for the occasion.

Below a 1997 photo of them walking their dog on the streets of New York. 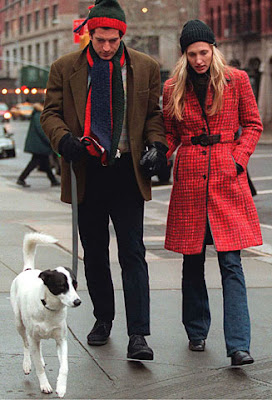 Photo: GQ
Posted by RetroVintageModStyle at 12:01 AM No comments:

What happens when you have checkers, stripes, and paisley all in an ensemble? The result is pretty much like what Will Chalker is wearing on the photo below from Lubiam's Fall/Winter 2010-2011 collection. The checkered jacket blends perfectly with the striped tie, all in black and white; while the paisley pocket square adds some contrast to it all. 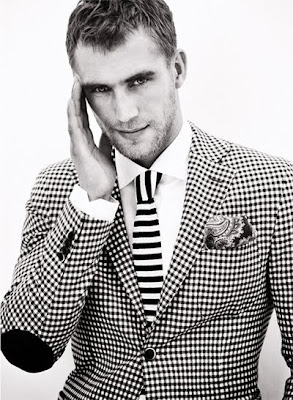 Freezing temperatures have been hitting several parts of the globe this Winter. Something appropiate and elegant to wear during this season is a parka (synthetic fur!) like the one worn by Mick Jagger below circa 1965. He paired his parka with some cordoury pants, a pullover sweater, and a shirt. Probably this is the same parka he wore on one of his portraits taken by David Bailey in the mid 60s. 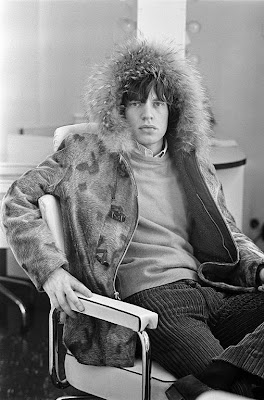 A good option to wear this or any other weekend when going around town, is this ensemble made up of: a navy blue jacket, khakis, light blue shirt, red tie, and what appear to be Persol 649s. This photo was taken in the mid 60s on the streets of London. 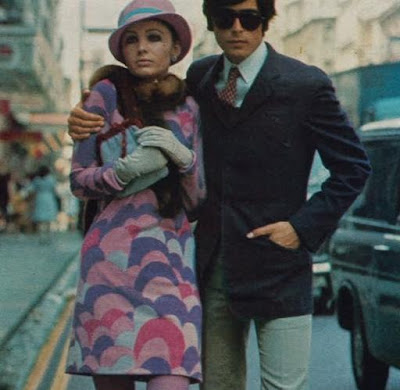 Posted by RetroVintageModStyle at 12:42 AM No comments:

John Barry, one of the greatest composers in cinema and music history, passed away this last Sunday at the age of 77. He was known for his outstanding scores for films such as: "Born Free", "Midnight Cowboy", "The Deep", "Out of Africa", "Dances With Wolves", "The Cotton Club", and most of the James Bond films (from 1962 to 1987, except "Live and Let Die", "The Spy Who Loved Me", and "For Your Eyes Only") .

His talent can be compared to that of any classical music composer; expressing emotions through haunting melodies filled with striking arrangements. 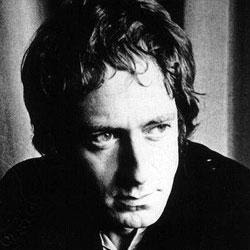