Gene Kelly: An American In Paris

In 1951 Gene Kelly starred in "An American In Paris" alongside Leslie Caron. A film not only memorable for its interesting plot and dance sequences, but also for Gene Kelly's ensembles. One of these was made up of navy blue pants and polo, what makes it "original" is the polo's wide white collar. 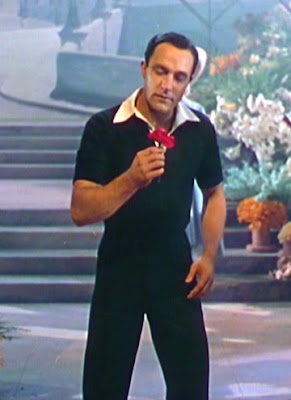 Kelly's dance moves have inspired many dancers and performers for decades. Below a photo that captures him in mid air doing one of his trademark moves. He is wearing a fitted polo and pleated trousers, with white socks and black loafers, for some a fashion mistake, for others reminiscent of Michael Jackson. 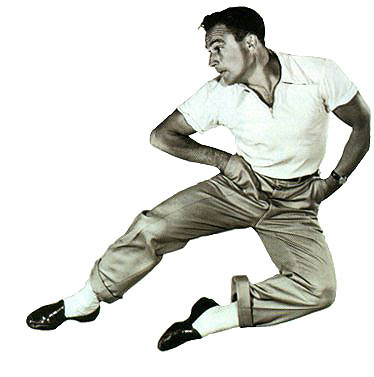 Photos: Flickr
Posted by RetroVintageModStyle at 12:52 AM No comments:

Elliot Gould in 1973's "The Long Goodbye" proved that one can look stylish and cool even if not everything is "perfectly in place". The curly messed up hair, the unbuttoned shirt collar, open tie, and attitude helped Gould during his portrayal of detective Philip Marlowe. 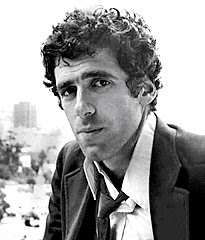 Photo: Flickr
Posted by RetroVintageModStyle at 12:50 AM No comments:

A stylish and elegant gentleman's wardrobe must have items such as: a white shirt, a pair of 501s, a black suit, a black tie, Wayfarers & Aviators, a V neck t-shirt and sweater, a scarf, black shoes, boat shoes, a pair of sneakers, a trench coat, and a Nautical pullover just to mention some. An item to add to this "list of basics" is the funky/catchy design shirt, like the one Robert Wagner is wearing below.

Sometimes it's fun and cool to spice up our ensembles with pieces like this shirt; of course it has to be done in an moderate and aesthetical manner. A shirt like this would look great while you're on the beach or loungin' with your friends. I would recommend you choose a shirt that has a catchy design but doesn't look like a costume. 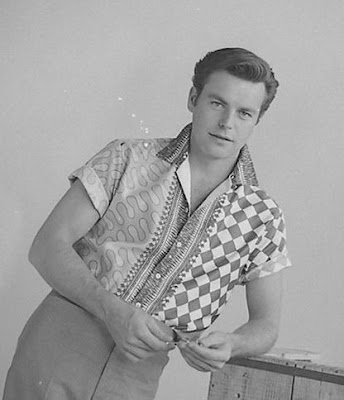 Photo: Fanpop
Posted by RetroVintageModStyle at 2:19 AM No comments:

For this Spring/Summer there is nothing more elegant and sharp than a white dinner jacket. Ideal to be worn on late Spring and all of the Summer, this jacket not only allows one to survive the warm weather while attending a party, but it also reflects your good taste. Worn by the likes of James Bond (Sean Connery), Humphrey Bogart, David Niven, and Roger Moore (photo below) in past decades, this jacket epitomized class and style. 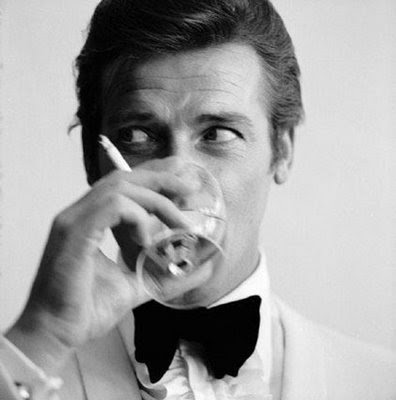 The white dinner jacket is one of those "classic wardrobe items" that never goes out of style. A proof of this is Brandon Flowers, lead singer of "The Killers", who is wearing one while trying to channel his inner James Bond. 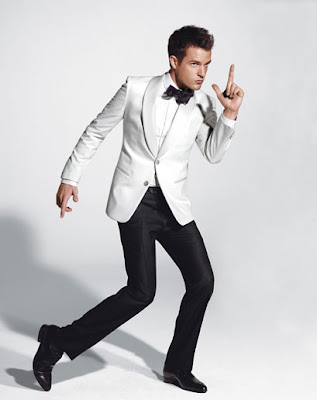 Photos: Flickr & GQ.com
Posted by RetroVintageModStyle at 2:03 AM 4 comments:

Ryan Paris' song "Dolce Vita" was a song heard everywhere in Europe during the Spring/Summer of 1983. Its video not only gives us a glance at the streets and sights of Paris, but also at Parisian streetstyle during the early 80s (25 years before "streetstyle" was popular in the late 00s).
On the video Ryan Paris wears a simple yet stylish outfit made up of black trousers and shoes, with a white jersey and a black/white checkered vest. Some posts ago I had already posted about vests, and I think that they're a good option for Spring/Summer, whether in cotton or denim. 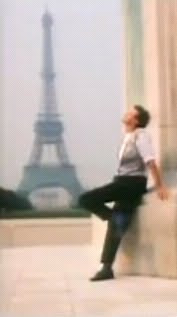 I think the video for this song should have shown Paris strolling around Rome's Via Veneto, due to the fact it is slightly inspired on "La Dolce Vita", but nevertheless it is a good video.


Photo & Video: Youtube.com
Posted by RetroVintageModStyle at 1:38 AM No comments:

Is the photo below part of an advertising campaign or an editorial? No, it's a scene from the movie "Stoned" in which Rolling Stone Brian Jones & Anita Pallenberg are portrayed strolling on the streets of London around 1966-1967.

Both are wearing striped clothes, Brian an outstanding and very Mod pinstriped blue and white double breasted suit (although not very visible his tie is red); while Anita is wearing a striped long sleeved mini dress with a belt at her waist. Brian wore a similar suit like this in real life. Definetly great ensembles that can be worn this Spring/Summer. 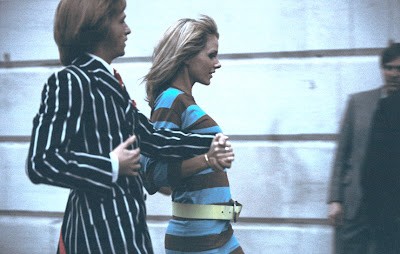 Art in the 20th Century was deeply influenced by the likes of Warhol, Picasso, Dali, Mondrian, Lietchestein, and Haring just to mention some. Keith Haring was an artist who revolutionized art in the 80s, and became a New York City icon. His drawings on murals, canvas, and several objects (t-shirts) were characterized by their bold lines, brilliant colors, and movement. Keith not only tried to reflect everyday situations and characters on his works, but also intended to create awareness on several issues, such as AIDS, of which he died in 1990. 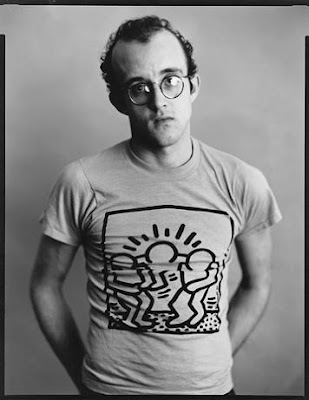 For this Spring Summer there's nothing more practical to wear than a t-shirt, but what would make it stand out and look stylish is if it has an eye catching print such as the one Haring is wearing; obviously one of his drawings. Yet in case you don't have luck in finding a t-shirt with a Keith Haring print you could opt for an interesting print, the subject doesn't matter. It may look a bit casual, but if you want to wear it to the club or somewhere more formal just put over a black or white jacket depending on the t-shirt's color. 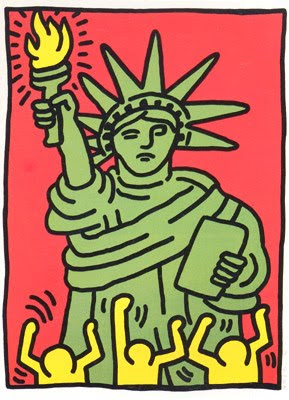 Keith Haring's "Statue of Libery" (1986), my favorite work from him.
Photos: Flickr & hamiltonselway.com
Posted by RetroVintageModStyle at 12:00 AM No comments:

Tell Her About It

That's what Billy Joel sang on the 1983 video for his song with the same name. The video takes place at a TV show performance back in 1963, and besides being a very dynamic and entertaining one, what stands out from it is Billy Joel's ensemble, a white jacket with black trousers and shirt, a red tie, white shoes, and Wayfarers. In one scene of the video he is also wearing a red jacket, with a black shirt, and a red bow tie.
An outfit inspired in the 60s, that looks very 80s, and can still be worn nowadays without any problem at all. 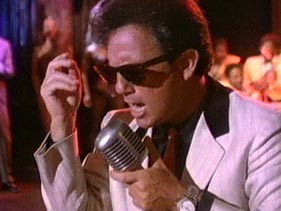 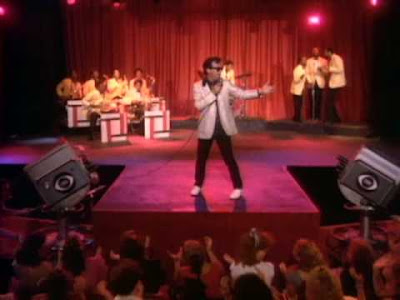 Photos: Flickr
Posted by RetroVintageModStyle at 1:45 AM No comments:

One of soccer's legends from the 60s and 70s is George Best, who is remembered mostly for playing for Manchester United. Below George Best confirms that one of the "best" and most elegant combinations is that of black and white. He is wearing black trousers and vest with a white shirt, simple yet bold. 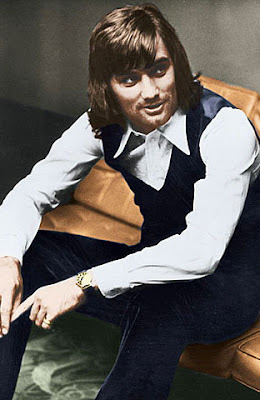 Cliff Richard is an English singer/songwriter who holds the record of being the only British act in having a hit in every decade from the 50s to the 00s. Besides this and his music he can also be remembered for his ever changing hairstyles. In the photo below he is sporting a pompadour during the early 60s when he was a member of "The Shadows", and his name was Harry Webb. He is wearing a dark blue suit with matching skinny tie, a great ensemble. 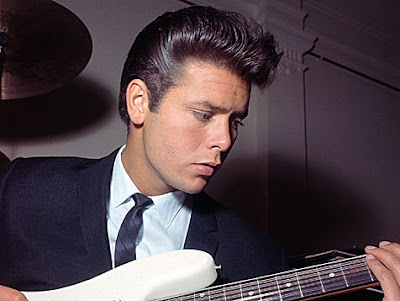 In the 70s he stopped having a pompadour and opted for a shaggy hairstyle, as can seen below in this video from 1980 in which he performs "Suddenly" from the movie "Xanadu" with Olivia Newton-John. Sir Cliff Richard is wearing an elegant and classic outfit, a white suit with a black shirt; while Olivia Newton-John is wearing a red sequin dress.

Posted by RetroVintageModStyle at 12:21 AM 4 comments:

Sometimes a small detail can spice up a very classic ensemble and in a way express your personality; such is the case of Gunter Sachs' paisley tie which goes along well with his navy blue blazer and light colored trousers. Next to him is Brigitte Bardot, who was his wife at the time, wearing a leather vest and trousers with a sweater and fedora. 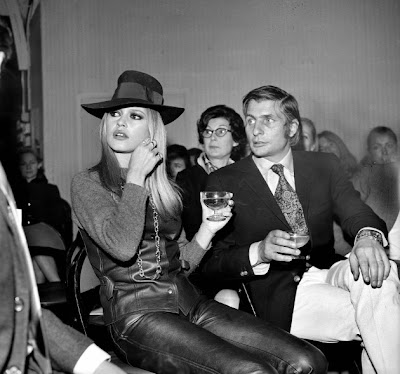 You probably think this song is about you...

Days ago Carly Simon's early 70s hit song "You're So Vain" was once again the subject of conversation due to the fact that it was apparently revealed who this song was about. Warren Beatty, whose style in the 60s and 70s was outstanding, had been rumored to be one of those (the one with the most "votes") who inspired this song. It was first said that David Geffen was the one, but days later that it was really about Warren Beatty.

If Warren inspired this song or not, only Carly Simon knows, one thing that can't be denied is that decades after this photo was taken, Beatty's ensemble still looks so fresh and wearable. Definetly a great look to go for this weekend. 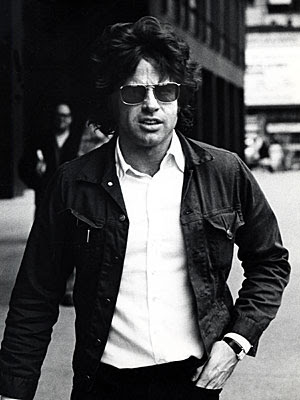 Photo: Esquire
Posted by RetroVintageModStyle at 2:27 AM 2 comments:

Months ago I posted a photo of James Dean that belongs to the same "breakfast" photo session as the one below, yet in this one he is not looking at the camera; he is looking through a window and just thinking.
His nautical sweater is just one of those must have items in every stylish gentlemen's wardrobe since it can be worn all year round; for Fall/Winter add a blue scarf or turtleneck, for Spring Summer a blue shirt beneath or just the sweater itself.
Black or tortoise wayfarers will complete this look. 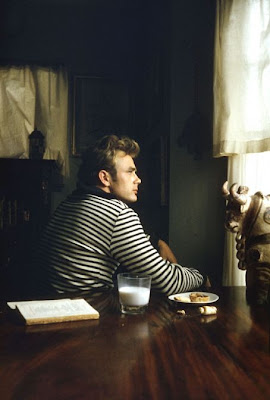 Back in 1983 Sting was part of "The Police" and during this time he was photographed by Alice Springs (June Newton, wife of iconic fashion photographer Helmut Newton). Wearing a double breasted suit and open white shirt Sting posed for the lens of Mrs. Newton in what appears to be
a hall with gothic domes. 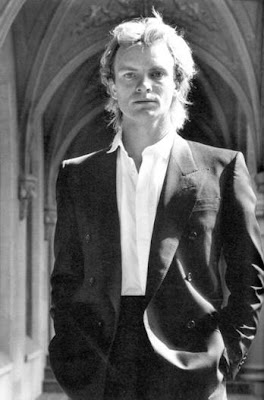