Sir Cecil Beaton was one of the most talented artists of the 20th Century. An artist might be the appropiate word to describe him since he's not only one of the best photographers in history famous for his fashion photos and portraits; but he was also an interior designer, a costume designer, a stage designer, diarist, and last but not least one of the best dressed during his time.

Below a self portrait of Beaton in which he wears a monochromatic ensemble, adding contrast with his shoes. 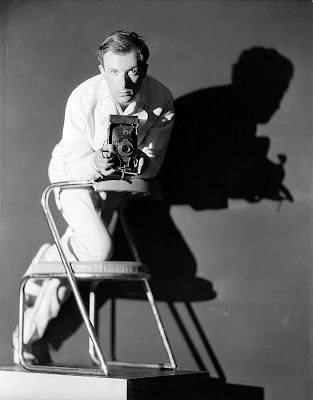 Photo: Flickr/Sir Cecil Beaton
Posted by RetroVintageModStyle at 12:00 AM No comments:

Roger Vadim and Jane Fonda are an example of "synchronized elegance" in this photo that shows them arriving at what appears to be a studio or film location. Vadim wearing a perfect suit and his trademark eyeglasses; while Fonda wears a mini dress and mini coat paired with boots which was a very popular trend crica 1965-1966. 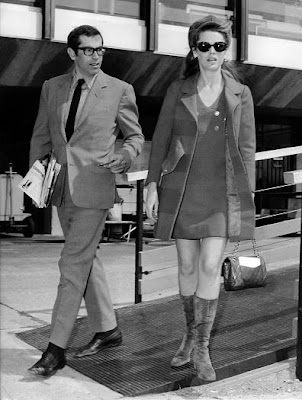 Yesterday was Bob Dylan's 70th birthday and to celebrate this occasion I'd like to do it with one of his most iconic photographs. Taken at a recording studio in the mid 60s, Bob Dylan is shown wearing his trademark hairstyle and Wayfarer inspired sunglasses paired with an all buttoned up shirt and a dark jacket.

Dylan is a living legend, a singer & songwriter who not only captured the spirit of change and revolution in the 60s with songs such as: "Like A Rolling Stone", "Blowin' In The Wind", and "The Times They Are a-Changin'"; a musical genius who has influenced other musical icons, someone with a unique sense of style, and last but not least a poet & painter. It can't be denied that some of his songs make up our life soundtrack. 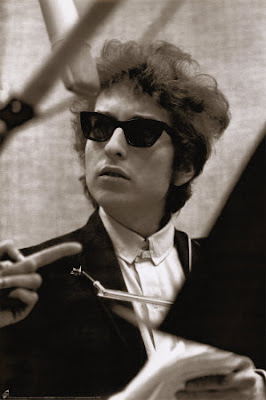 Photo: Allposters
Posted by RetroVintageModStyle at 12:00 AM No comments:

Carlo Mazzoni is one of Italy's upcoming writers, best known for his two previous novels: "I Postromantici" & "Il Disordine". On these two novels Mazzoni depicts the bright and dark side of Italian society taking the reader on intricate plots from Milano to Lago Maggiore and Venice.

On May 2011 Carlo Mazzoni has released his new novel "Due Amici", which differs completly from his previous works. This time the plot's epicenter is one of life's most important virtues and values: friendship. "Due Amici" tells the story of two friends, Matteo & Gio; their journeys throughout life, their highs and lows, their relationship with Margherita, but most importantly it highlights the importance of an everlasting friendship. Set in Milano, Tuscany, and New York on modern times and with lots of imagery, this novel will not only entertain the readers but also make them think and analyze the role of friendship in their lifes. 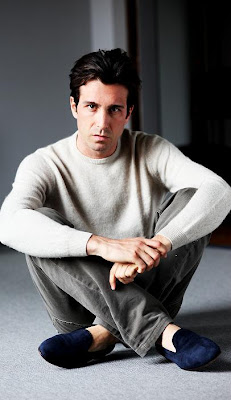 Photo: Carlo Mazzoni
Posted by RetroVintageModStyle at 12:00 AM No comments:

Dennis Hopper attended 1980's Cannes Film Festival to present his film "Out of the Blue" which was competing for the Palme d'Or that year.

Hopper gives an example of the perfect ensemble to wear on the last days of the Festival, it ends this weekend, or while relaxing between screenings. Pretty basic, casual, and simple: a light sweater, jeans, sneakers, and to spice it up a cowboy hat. This last accessory is not something one would usually wear at Cannes or with an ensemble like Hopper's, but still it looks original and fun. 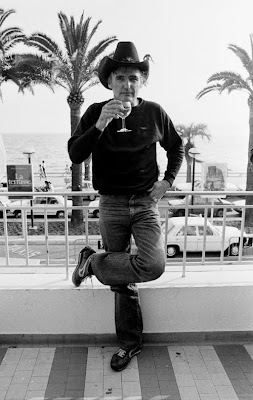 "Il Gattopardo" directed by Luchino Visconti and with a cast lead by Burt Lancaster, Claudia Cardinale, and Alain Delon was one of the films featured in 1963's Cannes Film Festival. Considered by some as Visconti's masterpiece, "Il Gattopardo" won the Palme d'Or that year after competing with films such as "To Kill A Mockingbird".

Visconti, Burt Lancaster, and Claudia Cardinale posed with a gattopardo (leopard) on the coast of Cannes while promoting their film. 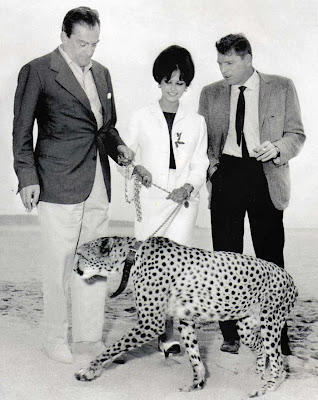 "Alfie" was a film screened on 1966's Cannes Film Festival, not only remembered for Michael Caine's portrayal of Alfie or by having won the Festival's Special Jury Prize (this Prize was created in 1966 to conmemorate the Cannes Film Festival's 20th anniversary), but also due to the way it was promoted within La Croisette. 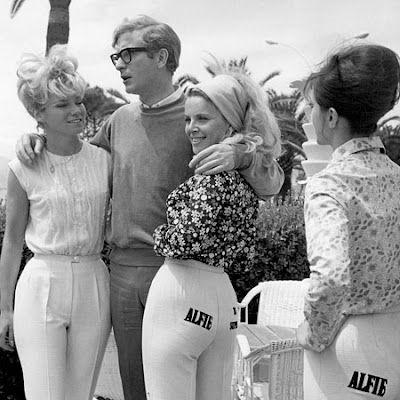 Lewis Gilbert and his crew decided to bring Alfie Elkins to Cannes by having Michael Caine and several models pose for photographers near the Boulevard de la Croisette. These weren't typical promotion photos, what made them different was the fact that all of the models wore white pants that had "Alfie Is..." written on the back. A very original promotion technique for the film. 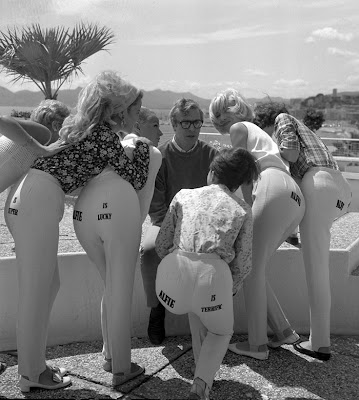 Michael Caine on the other hand wore light colored pants with a matching sweater and shirt to pose with "Alfie's Birds". Worth noticing are his trademark Oliver Goldsmith eyeglasses.

Posted by RetroVintageModStyle at 12:08 AM No comments:

1966 marked the Cannes Film Festival's 20th anniversary, and from May 5 till May 20 Cannes was the world's "Cinema Capital". "Alfie", "Modesty Blaise", "Doctor Zhivago", and "Un Homme et Une Femme" were among the films that graced the Festival's silver screen. Sophia Loren presided a jury made up by the likes of Vinicius de Moraes and Peter Ustinov.

Famed 60s fashion photographer, David Bailey and his wife at the time, acclaimed French actress, Catherine Deneuve were photographed arriving at the Palais des Festivals to attend a screening. Both Bailey & Deneuve gave a lesson of style and elegance, not only that night, but also when attending other Festival events. 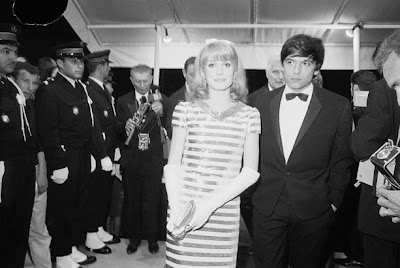 Photo: Flickr
Posted by RetroVintageModStyle at 11:45 AM No comments:

Cary Grant: A Stroll Along the Boulevard de la Croisette

To mark the beginning of the 64th edition of the Festival de Cannes, today May 11, 2011, I'd like to remember one of the most elegant and well dressed actors that has ever attended the Festival.

Cary Grant was filming in 1955 "To Catch A Thief" on the French Riviera, and Cannes was one of the film's main locations. Taking a break from the shooting, Grant decided to stroll along the Boulevard de la Croisette and experience the frenzy surrounding the Festival.

As it is known, the Boulevard de la Croisette is a 2 km long road that strecthes along the Cannes coastline, offering majestic views of the Mediterranean and nearby iconic hotels and restaurants.

Cary Grant's ensemble, made up of what appears to be a dark linen jacket and light colored pants paired with an open shirt and dark cravat, was more than appropiate for this occasion. 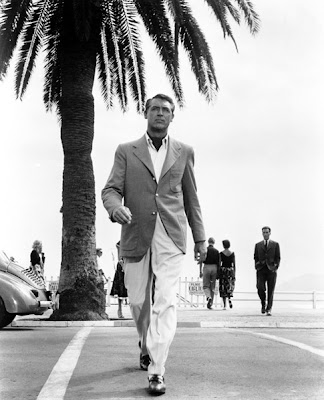 Gunter Sachs, who was a German photographer, documentary film-maker, industrialist, and author, died on May 7, 2011. He married French cinema legend Brigitte Bardot on July 14, 1966, after having thrown a ton of roses over her St. Tropez home that Summer. Their marriage lasted 3 years. Sachs was one of the best dressed men in the world during the late 60s and early 70s. 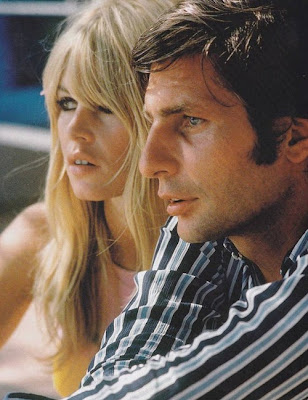 Andy Warhol was one of the most acclaimed American artists of the 20th Century and a leading figure in the Pop Art movement. From his iconic Campbell's Soup Cans to his Factory films that featured the likes of Edie Sedgwick and Nico, and portraits of Marilyn Monroe; Warhol was an art pioneer and visionaire.

In the mid 70s Andy Warhol began making again silkscreen portraits, just like the ones he had done in the 60s of Elizabeth Taylor and Jacqueline Kennedy. This time his portraits featured leaders from the worlds of fashion, music, art, cinema, culture, sports, and politics. 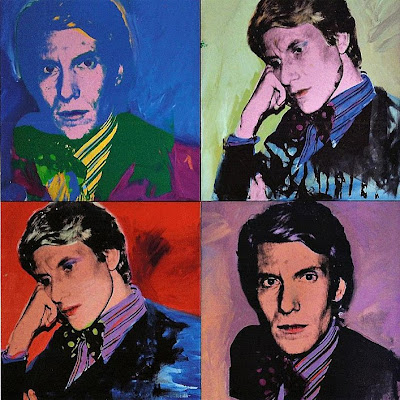 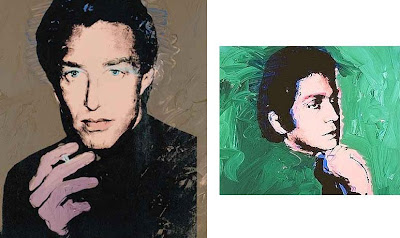 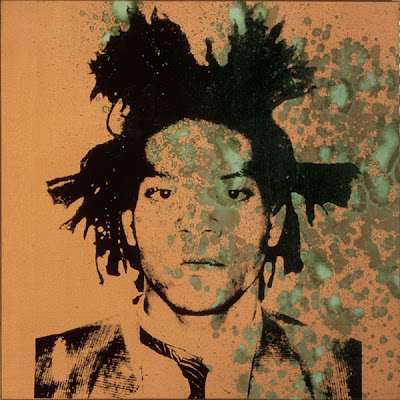 Tom Ford is not only one of the most talented designers in modern fashion, but a designer who knows how to express elegance, class, and good taste on all of his creations. In late 2010 he was acclaimed for his first womenswear collection designed for Spring Summer 2011, yet his menswear collection for this season is quite outstanding as well.

For Spring Summer 2011 Tom Ford's menswear is a blend of 70s Yves Saint Laurent safari jackets with "The Italian Job" suedejackets, "Miami Vice" circa 1984-1985, and elegant dandyism from the 50s and 60s. The color palette on this collection is made up mainly of dark and pastel colors, not shiny or very bold, such as: black, gray, brown, sand, white, pink, purple, and blue. 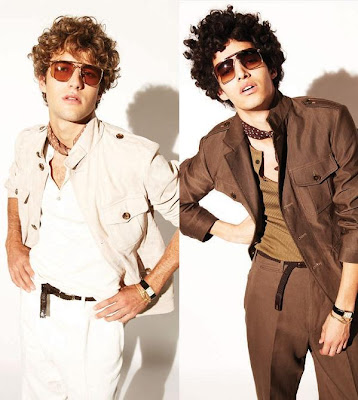 These two previous ensembles are very 70s inspired due to the oversized aviator sunglasses and the lightweight suede and cotton safari jackets. Worth noticing are the polka dot silk bandanas and woven belts that add a sophisticated European touch. 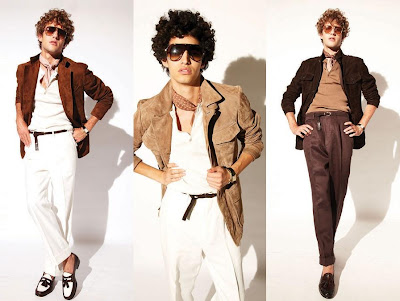 1969's "The Italian Job" proved that a suede jacket was a wardrobe essential for any stylish man, and despite temperatures being high in Summer one can still wear one of these on cool nights. The tassel loafers are quite impressive and very Italian too. 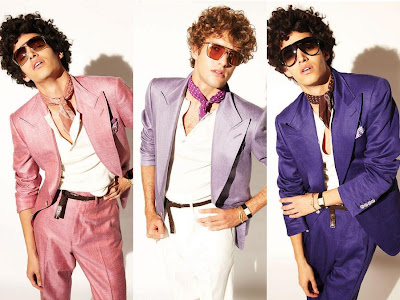 "Miami Vice" is certainly a Spring/Summer inspiration for many, and most likely for Tom Ford also. He brings the style of the popular 80s TV series to 2011 with a modern, sleek, and not so bold approach. Pairing up pastel colored linen jackets and trousers with accessories such as silk bandanas, woven belts, and oversized sunglasses, Ford expresses timeless elegance. The finishing touch is added by silk pocketsquares. 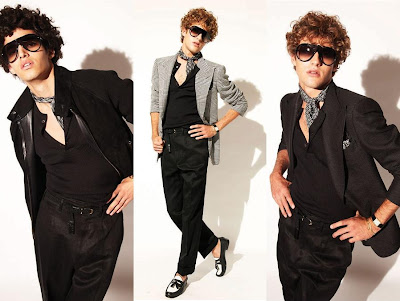 Black is the color of elegance, and Tom Ford knows it because he has created ensembles that are perfect for any dinner or party Summer night. 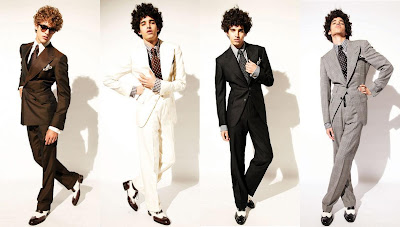 Ford expresses classic dandyism at its best with these suits which are a synonym of elegance and perfection from the ties, cufflinks, shirts, and brogues. My personal favorite is the Prince of Wales suit. 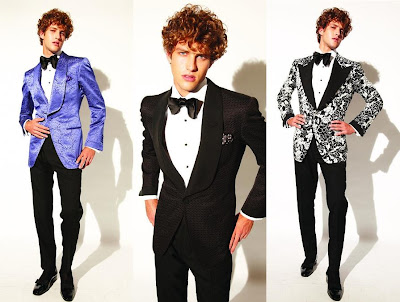 Photos: Tom Ford
Posted by RetroVintageModStyle at 1:11 AM 2 comments:

"Two For The Road" is a 1967 film that tells the story of the 12 year relationship between Joanna and Mark Wallace, portrayed by Audrey Hepburn and Albert Finney. A film whose plot is not told in a lineal manner, but narrated by mixing up the plot's sequence; forcing the viewer not to miss any single detail.

One of the best scenes from "Two For The Road" is that of the party held in a house at the South of France. A party where the best fashion trends from the era teamed up with an impressive interior design and music to deliver iconic images. 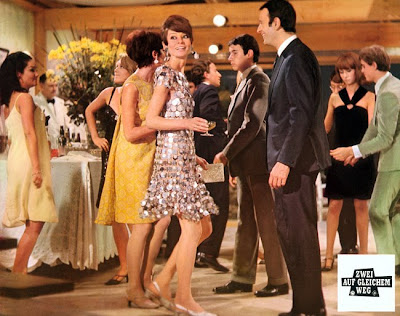 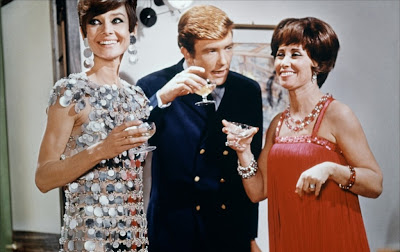 Posted by RetroVintageModStyle at 12:00 AM No comments:
Newer Posts Older Posts Home
Subscribe to: Posts (Atom)