The death of Dennis Hopper two days ago on May 29, has struck many due to the fact that not only one of Hollywood's most iconic and talented actors passed away, but also a Film Director, TV actor, photographer, painter, and art collector.

Having begun his career in Hollywood with James Dean on "Rebel Without A Cause" and "Giant", Hopper is remembered best for his roles in films such as "Easy Rider", "Apocalypse Now", and "Blue Velvet".

It was "Easy Rider", the 1969 film that captured precisely the 60s counterculture and lifestyle in the US, that gave Dennis Hopper international acclaim when he won the "Best First Film by a New Director" in 1969's Cannes Film Festival. This was his first directed film, which was also produced, co-written, and co-starred by Peter Fonda. "Easy Rider" shows us the journey of two bike-riding dealers, Wyatt (Fonda) & Billy (Hopper) along the Southwest, from California to New Orleans; with the only goals of finding freedom and attending the Mardi Gras. Jack Nicholson also appears on "Easy Rider" as George Hanson, a lawyer who joins Wyatt & Billy on their journey.

Below a photo of Fonda, Hopper, and Nicholson during "Easy Rider". 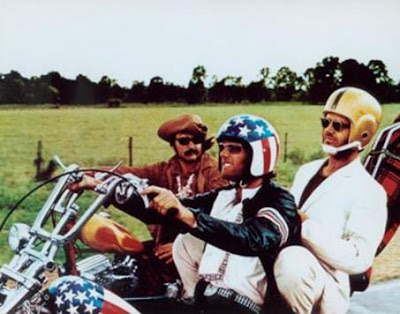 Dennis Hopper besides being an actor and director was also a talented photographer, painter, and art collector. He photographed the likes of Paul Newman and Ike & Tina Turner in the 60s. In "Apocalypse Now" he played the role of a photojournalist.

Hopper's works will be part of Jeffrey Deitch's inaugural show at the MOCA in Los Angeles this year. As an art collector, Dennis Hopper was the proud owner of art done by Basquiat, Warhol, Harring, Lietchistein, Hirst, and Banksy.

Photo: Bock
Posted by RetroVintageModStyle at 12:00 AM 2 comments:

The Spanish Movida (Movida Madrilena) was a cultural/artistic/social movement in Spain during the 80s. It was a type of "renaissance" in which several subcultures and groups had a big impact in many fields: music, art, cinema, nightlife, and fashion. Mecano, a Pop-New Wave group, was one the Movida's exponents.

While shooting their video for "Me Cole En Una Fiesta" ("I Crashed Your Party"), its three members were wearing a very Dandy look, which had the 80s Movida touch. Jose Maria Cano is wearing a dark orange suit (with double breasted jacket and high waisted pants), a striped white shirt, and a mustard yellow tie. Ana Torroja wears a pink mini dress with draping and ruffles, very reminiscent of the 40s. Meanwhile Nacho Cano is wearing a similar grey suit like the one worn by Jose Maria. 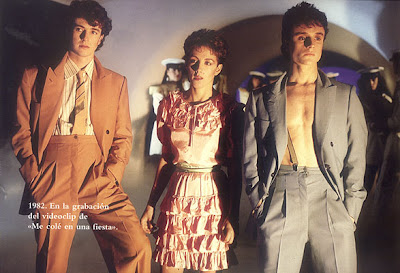 Lord Snowdon in The Bahamas

Anthony Armstrong-Jones, Lord Snowdon, is definetly one of the greatest photographers of the 60s and 70s along the likes of Newton, Avedon, Bailey,Clarke, Penn, Scavullo, and Parkinson.

In the photo below we have him and his then wife, Princess Margaret of England, in the mid 60s strolling around a harbor deck in the Bahamas. The setting I must say is quite impressive. Lord Snowdon opted for an all white look, yet he decided to add some contrast by wearing some white/dark pin striped pants (very Mod item) and a black belt with a golden round buckle. His shirt has a military-safari influence due to the pockets and epaulets. 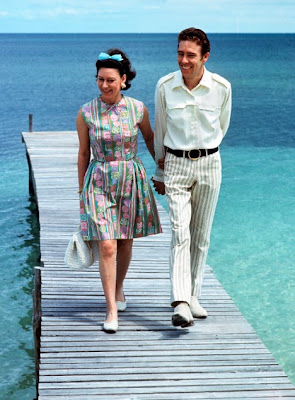 Photo: The Daily Mail
Posted by RetroVintageModStyle at 9:58 AM 1 comment:

There's nothing more fresh and versatile for this season than a pair of white jeans. A proof of this is David Hemmings' ensemble on "Blow Up" which is made up of white jeans, a pastel blue long sleeve shirt, a black belt, and black shoes. Simple yet elegant and bold.
In this scene from "Blow Up", Hemmings is shown aside Jane Birkin & Gillian Hills. 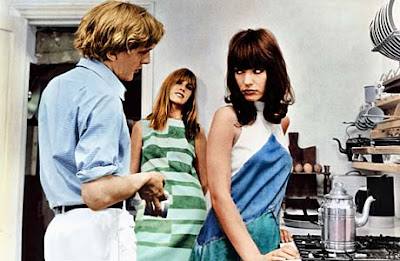 This year's Cannes Film Festival will be coming to an end this upcoming Sunday, May 23. To continue looking back at the Festival's history, below is a photograph of Paul Newman attending it in 1973. This was a special ocassion for him since "The Effect of Gamma Rays On Man-In-The-Moon Marigolds", a film directed by Newman was competing at the Festival. His wife, Joanne Woodward who acted on it, won 1973's Award for Best Actress.

Paul Newman decided to wear a white turtleneck (a very Mod item, yet something I would only wear in Summer if it was very cool) and what appears to be a blue blazer. Worth noticing are his Onyx ring and black sunglasses. Simple and bold. 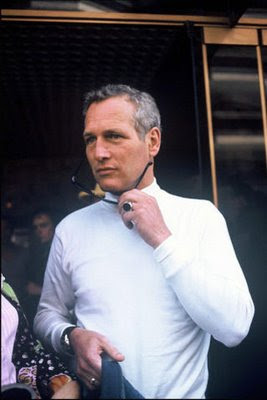 In 1972 Robert Redford and film director Sydney Pollack were at Cannes promoting their film "Jeremiah Johnson". For the ocassion both of them opted to wear shirts whose design is very representative of the 70s. Redford completed his ensemble with white pants, boots, and a pair of "oval shaped acetate aviators". Pollack on the other hand wore high waisted pants and aviators. 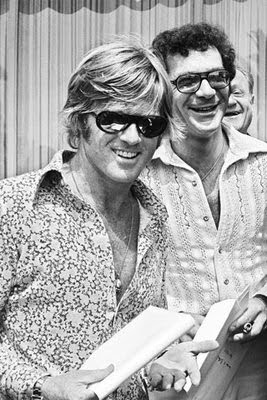 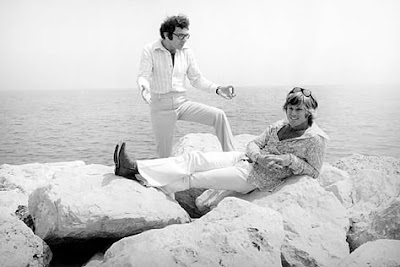 Photos: Flickr & Cinebeats
Posted by RetroVintageModStyle at 12:00 AM 2 comments:

David Bowie brought to life the saying "Less is more" when he attended the Cannes Film Festival in 1978. Instead of wearing black tie, he opted for a light colored jacket with wide lapels and a matching 3 button jersey. As an accesory he is wearing a discrete crucifix. 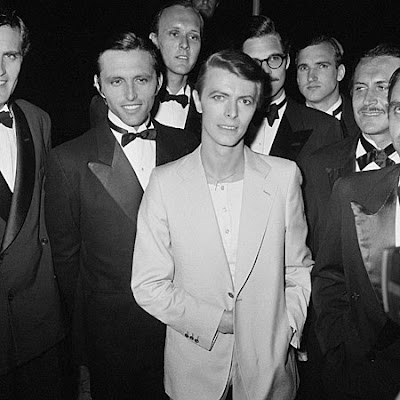 Posted by RetroVintageModStyle at 12:00 AM 2 comments:

In May 1968, Sharon Tate and Roman Polanski attended the Cannes Film Festival. It was during this year that as a result of the protest movement in France (May 1968) the Festival was cancelled just 8 days after it had begun. Polanski was one of the jury's members, and like other directors such as Godard, Truffaut, and Malle supported the Festival's cancellation as an act of solidarity with the protests.


Below we have a photo of the Polanski's after a film screening days before the Festival ended suddenly. 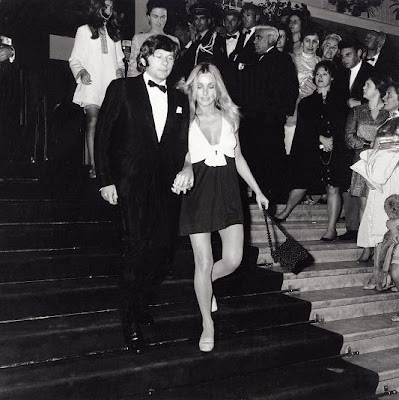 A day at Cannes with Alain Delon

The 63rd Festival de Cannes begins today, May 12. Looking back at this Festival's history, I'll go back to May 1962 when Alain Delon attended this Film Festival alongside Romy Schneider and Sophia Loren. Below you'll be able to see several photographs that were taken all on the same day. 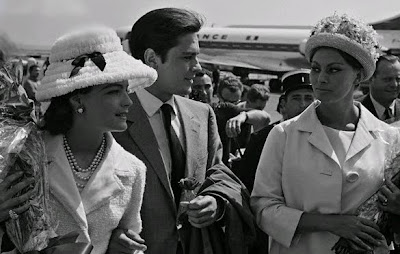 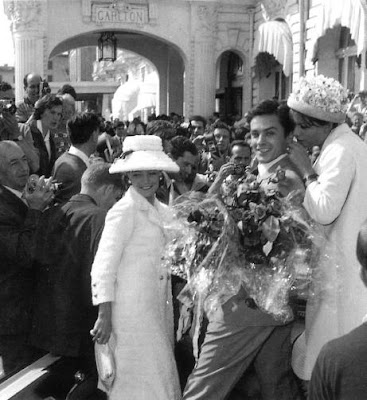 Outside the Carlton they were greeted by a crowd of fans, visitors, and photographers. 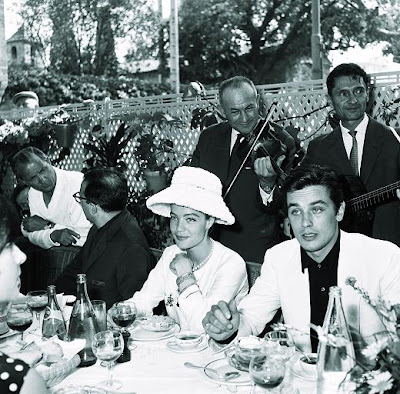 Alain & Romy had lunch with others of their entourage at a Villa in Cannes. Delon changed his dark suit for a white suit and black shirt. 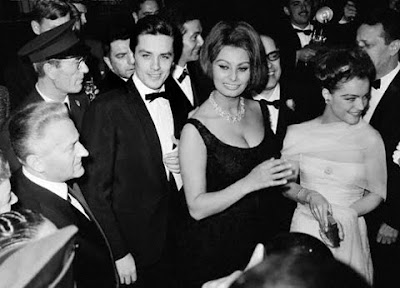 Later that night the 3 of them attended the Festival at the Palais des Festivals et des Congres. Alain Delon was promoting during this festival "L' Eclisse", a film in which he costarred with Italian actress Monica Vitti. This film won 1962's Jury Special Prize.
Photos: Flickr

An all Lacoste ensemble from circa 1980. 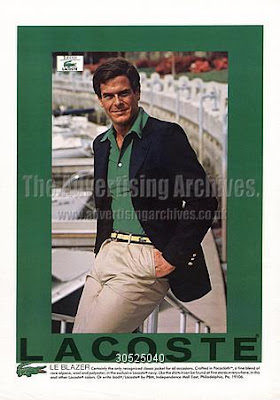 Posted by RetroVintageModStyle at 12:24 AM 2 comments:

Bob Dylan "tells" us that all you need this Spring/Summer is a good pair of sunglasses, an original print shirt, and attitude. 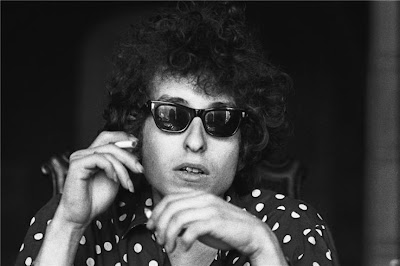 Photo: Taringa
Posted by RetroVintageModStyle at 12:07 AM 2 comments:

Flying with The Beatles

The Beatles are amongst the best ambassadors of 60s menswear since their style during this decade went from Mod to Boho/Ethnic to Romantic to Hippie inspired to Saville Row. Below we have them circa 1966-1967 before boarding a plane, on the days when you would enter the plane using a staircase.

John, Paul, and Ringo are all wearing sports jackets with open shirts, while George is wearing a suit. Their ensembles have different shades of blue and grey. 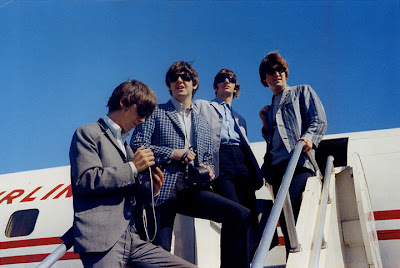 Photo: Taringa
Posted by RetroVintageModStyle at 1:14 AM No comments:

John F. Kennedy Jr. ("John John") and his sister Caroline were photographed on the streets of New York in April 1977. Something to look at in the photo below is that both siblings are wearing very similar ensembles made up of jeans and jacket with a shirt or blouse underneath. 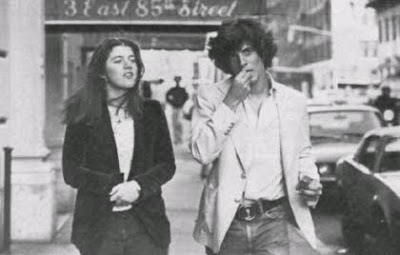