David Bowie can be defined with two words: everchanging chamaleon. He is one of music's icons and an artist who has changed his look many times within the last four decades. From the Mod look he wore in the 60s, to the paisley shirts, to Ziggy Stardust, to sleek suits in the 80s and 90s, Bowie has influenced men's fashion.


Below we can see Bowie sporting a hairdo that's a mix between the "Mod Bowl" and a "Mullet" in 1966. 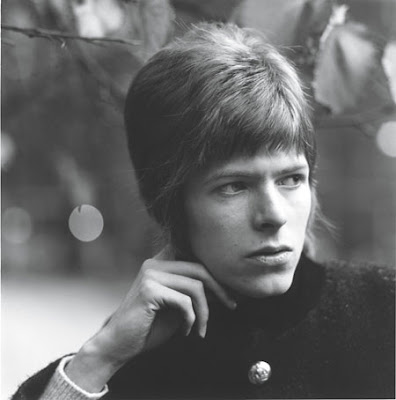 Frank Sinatra, known to many as "Ol' Blue Eyes" and "The Voice", was one of the greatest musical performers of the 20th Century. Starting his career in the 40s during the last years of the Big Band era, he reached the peak of his career in the 50s and 60s, and was a living legend in the 70s and on. Songs such as "Strangers In The Night", "My Way", "Something Stupid", "The Way You Look Tonight", among others are part of his musical legacy.

Below he is shown during a recording session in the early 60s wearing an outstanding grey suit paired with a navy blue tie, cufflinks, pocket square, and matching fedora. A look that has made its comeback in the last two years, and looks stylish now as it did back then. 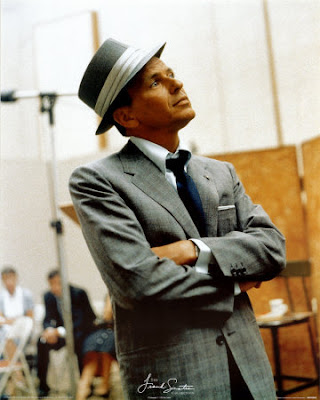 Long before the Hollywood couples of today, there was Elizabeth Taylor & Richard Burton, they were perhaps "The Couple" of the 60s. Their love story began on the set of "Cleopatra", one of the biggest productions in cinema history. They got married years later, Richard gave Elizabeth the "Taylor Burton" diamond in 1969, then divorced, then remarried and divorced in the 70s, and remained close till Burton's death in 1984.


From Hollywood to Monaco, to St. Tropez to London, to Mexico; they always caught the attention of photographers. During the shooting of "The Night Of The Iguana" in Mexico, famed photographer Henry Clarke (the one responsible for some of the most iconic fashion photographs of the 60s) snapped both Elizabeth Taylor & Richard Burton leisuring on set. He is wearing a matching light colored turtleneck jersey and trousers with some suede shoes, while Elizabeth appears to be wearing a kaftan. 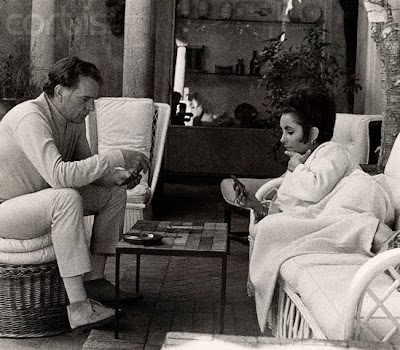 Photo: Corbis
Posted by RetroVintageModStyle at 1:27 AM 2 comments:

To Catch A Thief

"To Catch A Thief" is a Hitchcock film from 1955, starring Grace Kelly as Frances Stevens, an American heiress & Cary Grant as John Robie, a former jewel thief. Set in the French Riviera (Cannes and Monaco mainly), this film does not only have an interesting and intriguing plot (someone is commiting jewel thefts under Robie's name, and both Frances and the real Robie are determined to catch the thief), but it is also a great example of fashion in the mid 50s.


Cary Grant is seen throughout the movie wearing tuxedos, nautical inspired shirts, sleek suits, and an all black ensemble. Grace Kelly's wardrobe designed by Edith Head is the perfect complimment to her beauty and classy personality.


It was around the time this film was made that Grace Kelly met Prince Rainier of Monaco, and in one scene Grace drove on the same road where she had the car accident that took away her life.


Cary Grant is not only one of Hollywood's most elegant actors, but he is the one who co-starred in films with Hollywood beauties and legends such as: Deborah Kerr, Grace Kelly, and Audrey Hepburn. 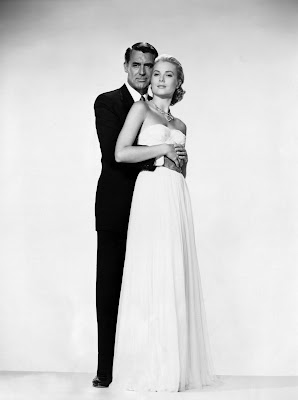 Photo:Flickr
Posted by RetroVintageModStyle at 12:43 AM 3 comments:

Earlier this year GQ featured an editorial in which Sebastian Stan recreated some iconic Paul Newman looks and photos. The result was a good one since both the outfits and settings were quite identical to those in the original photos. Of course no one can match Paul Newman, but Stan did a good job in portraying this Hollywood Legend.


Below one of the shots from this editorial, which depicts Sebastian Stan enjoying a moment of leisure wearing a slim fit navy blue suit with a matching skinny tie. 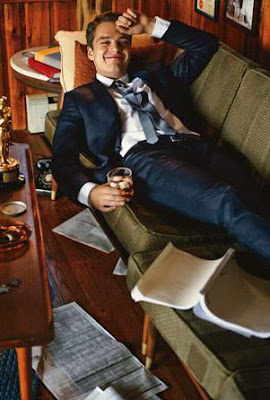 Photo: GQ
Posted by RetroVintageModStyle at 1:14 AM 2 comments:

The King Of Cool

Nicknamed "The King Of Cool", Steve Mc Queen is an all time fashion icon who continues influencing fashion decades after his untimely death, his influence is perpetual. Below we see him wearing his signature Persol Rattis, a black turtleneck, a wool blazer, and some dark trousers; another option to wear this Fall/Winter.

It's Still Rock N' Roll To Me

Billy Joel, "The Piano Man", is an icon of the musical scene from the late 70s and 80s. He is responsible for hit songs such as: "Just The Way You Are", "Honesty", "Piano Man", "Uptown Girl", "It's Still Rock N' Roll To Me", and "We Didn't Start The Fire" amongst others.


Shown below in the early 80s, he is wearing an outfit that can be worn perfectly this Fall/Winter. All that's needed is just a pair of jeans, a leather jacket (preferably a Bomber), and a t-shirt. 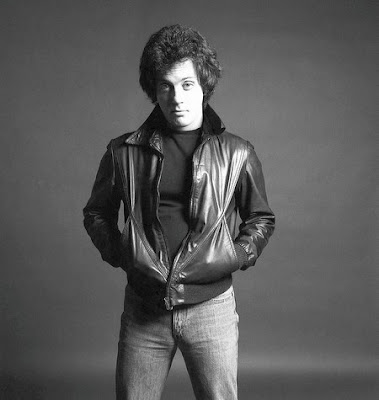 The elegance of a scarf

Scarves are a must-wear in my opinion during Fall/Winter, not only because they are ideal for the cool temperatures, but also because they can "spice up" any outfit. Available in different colors, patterns, and materials, scarves are an item that never goes out of style within the passing of time.


Below French cinema legend, Jean Paul Belmondo, strolling around on a cool morning wearing a striped cashmere scarf over his coat. 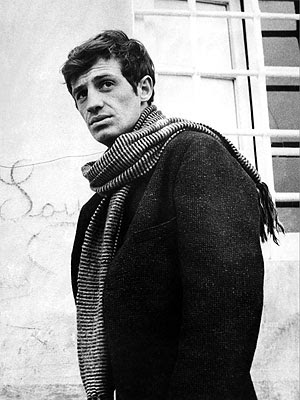 Photo: Flickr
Posted by RetroVintageModStyle at 11:52 PM No comments:

There is nothing more elegant and perfect for this fall winter's parties or everyday life than a sleek/well fitted black suit paired with a skinny tie. A photo from 1966 that depicts a male model with the outfit mentioned previously, along with a female model who's wearing a Mary Quant bicolored coat with the very popular blue tinted round shaped sunglasses. Less is more.... 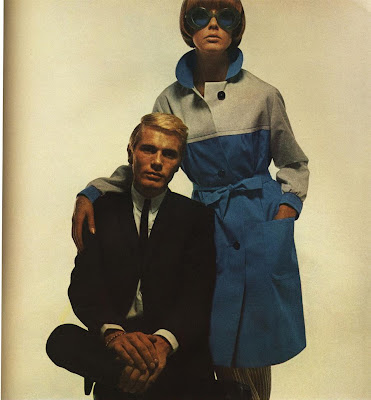 Photo: TFS
Posted by RetroVintageModStyle at 1:39 AM 3 comments:

During the 60s Great Britain gave the world sensational music acts such as The Beatles, The Rolling Stones, and The Who, just to mention a couple of them. Their conquest on the US Billboard charts during those years is refered as "The British Invasion".

The Who one of the most iconic groups from this period, just like their musical peers, became one of the representatives of men's fashion in the 60s. Below we can see its members donning Mod hairstyles paired with "avant garde" clothes for those years. Peter Townsend's "Union Jack" jacket gets all of the attention on this photo. 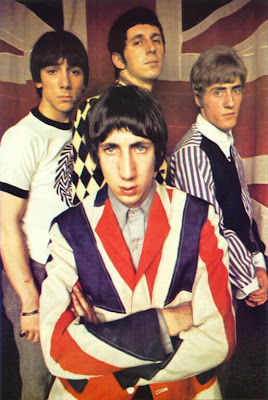 Posted by RetroVintageModStyle at 11:19 PM 3 comments:

This is my blog's 200th post and to conmemorate this milestone and thank all of my readers for their support, today I'll be posting a very original advertising campaign from 2006. What makes this campaign original is that it is 100% inspired on the 60s cinema classic "La Dolce Vita". 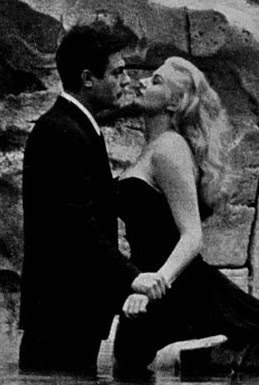 I won't tell you what this campaign consists of, since words can't be precise to describe it. However I can tell you that the first time I spotted this advertising campaign was while strolling on 7th Avenue in New York City back in the summer of 2006. Below a photo of this very original billboard. 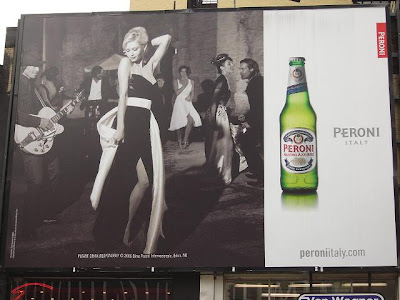 Months later I stumbled with the TV spots which were part of this campaign. Below you can see the black and white & color versions of these spots.

Less is more at Studio 54

"Black is elegant and goes well with everything" and "Sometimes less is more" are two style proverbs that are heard constantly on the street and on magazines. An example that combines both of this principles of style is the photograph below. Taken in the summer of 1978 at Studio 54 we can see Barbara Carrera and Jerry Hall with two gentlemen who are both wearing black suits with unbuttoned wide collar shirts, and nothing more.


A classic, elegant, stylish, and functional outfit to hang out at the club with your friends all year round. 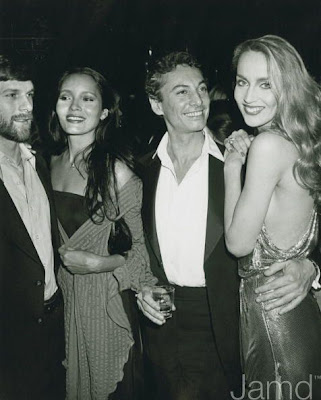 Photo: Jamd
Posted by RetroVintageModStyle at 1:15 AM 3 comments:

Marlon Brando, Hollywood Legend, best remembered for his roles in "A Streetcar Named Desire" and "The Godfather", is photographed below while strolling around a crowded airport in the 60s. Who said travelling and style were not compatible? 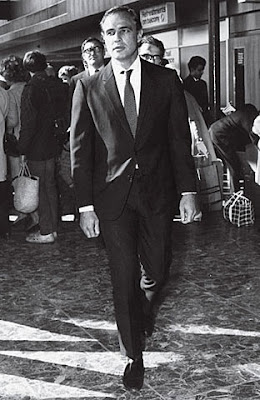