Summer with The Beatles

The Beatles knew that Summer should be spent relaxing at the pool or beach. Yet while doing so they managed to continue looking classy and dapper. Four styles, four ensembles. 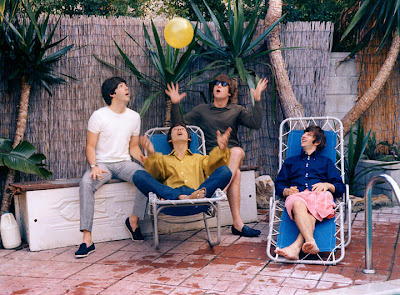 Photo: Flickr
Posted by RetroVintageModStyle at 12:06 AM No comments:

Richard Avedon was one of the 20th Century's greatest photographers along with the likes of Newton, Scavullo, Bailey, Clarke, & Penn. His photos are part of fashion history since not only do they portray fashion at a specific era, but also helped influence it.

Avedon shows us that clothes should be both stylish and functional; and that less is more. Below photographed while shooting an editorial, he opted to wear a pair of Levis 501s, with an epaulettes shirt, and his oval shaped eyeglasses. 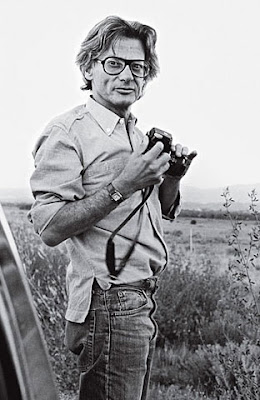 Fashion on the Golden Gate

When impressive landscapes & views are combined with elegant clothes, the result is almost perfection as shown on the photo below. A scene that evokes "Vertigo" (which one of its most memorable scenes was filmed here) and "The Thomas Crown Affair" (the clothes) under one of San Francisco's icons: the Golden Gate Bridge.
The male model is wearing a 3 piece dark suit (without the jacket); while the female model wears a minidress with a cape and oversized hat. 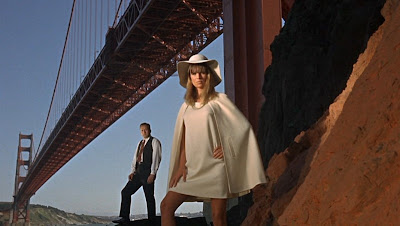 Relaxing at the Pool

Benjamin Braddock, who was portrayed by Dustin Hoffman in 1967's iconic film "The Graduate", shows us that even when enjoying a sunny day of leisure and relaxation at the pool one can look dapper with a good pair of sunglasses. He is wearing a pair of wrap sunglasses, which were kind of modern in the late 60s. And don't forget the sunscreen while you're at the pool or beach. 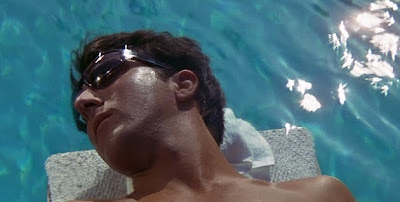 Betty & Francois Catroux proved in 1969 when they were photographed at their home why Yves Saint Laurent is one of fashion's geniuses. The Catrouxs wore YSL's iconic Safari jackets with matching pants and braided leather belts.


A year before, Saint Laurent had released these jackets as part of his ready to wear line, Rive Gauche. 40 years and many trends later, YSL's Safari jacket is still a classic and must have; a versatile piece that can be worn in Summer or Fall. 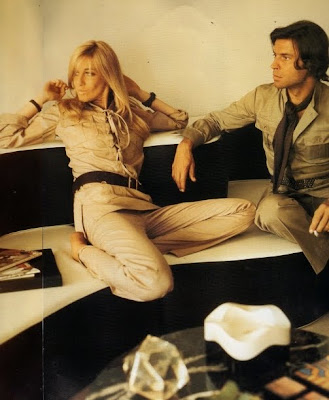 Steve McQueen is undeliably one of menwear's style icons. Wearing either a double breasted suit, turtleneck, plain t-shirt, or like in the photo below cuffed khakis with a cotton shirt & gladiator sandals, McQueen was always the "King of Cool".

Who said one can't be stylish and cool during Summer's warm days. 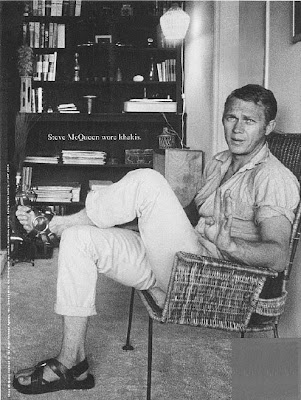 Photo: Flickr
Posted by RetroVintageModStyle at 12:39 AM No comments:

Wearing a simple yet very elegant ensemble made up of white pants and a vertical striped shirt, Gunter Sachs shows that one can still board a plane this Summer like he did back in 1967. While the rule is to always wear a belt with pants, Sachs decided not to do so, giving his outfit a more relaxed air. Also worth noticing are his leather strap watch and the way he pulled up his shirt's sleeves. 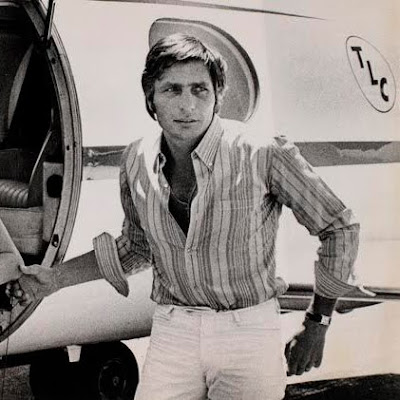 Posted by RetroVintageModStyle at 12:29 AM No comments:

In the summer of 1966 George Harrison and his wife at the time, British model Pattie Boyd were photographed while enjoying some moments of relaxation during their vacations. Both opted to wear white, George went for an all white look while Pattie decided to add some contrast with a colored blouse. However George Harrison added some contrast and a touch of style to his ensemble with his dark colored espadrilles. 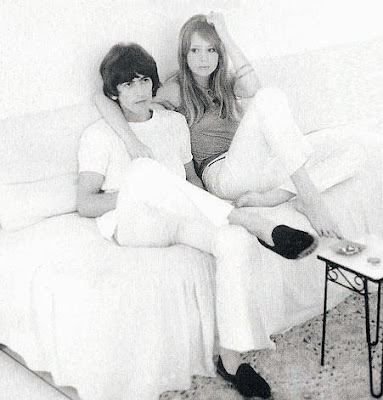 Photo: Flickr
Posted by RetroVintageModStyle at 2:10 AM No comments:

Once again L.G.R Sunglasses has proven why they're one of the best options out there nowadays for sunglasses; not only because of the quality and materials used on their sunglasses, but also because of their classic, elegant, and vintage inspired designs.
Recently L.G.R has released its Spring Summer 2011 collection which is made up of 4 new models, named after African cities (like all of its sunglasses and eyeglasses). 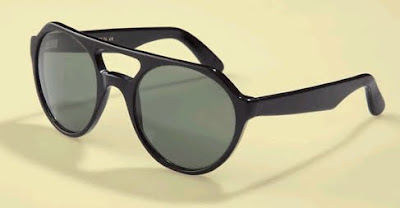 The Cape Town sunglasses have an almost round shape, reminiscent of sunglasses from the mid 50s. Available in Black (with green, blue, and yellow gradient glasses), Brown, Havana, and Yellow; Cape Towns are ideal to be worn everywhere this Summer, from city streets to the beach. 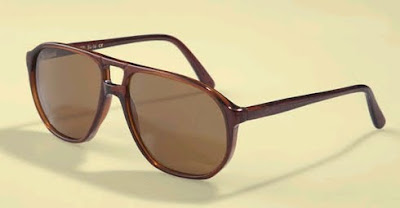 On the other hand, the Tangier sunglasses available in Black (with green, blue, violet, and yellow gradient glasses), Brown Sunbrown, and Yellow; look like they could have been worn in the 70s or 80s. Tangiers can be worn with both casual and formal ensembles without any problem.
Worth checking out also are L.G.R's Enteara and Siwa models, although these would look great on any woman.

Photos: L.G.R
Posted by RetroVintageModStyle at 12:11 AM No comments:

"A Plein Soleil" & "La Piscine" are among the best films in French cinema history, and both share several similarities.

Released in 1960 and 1969 respectively, these films' leading characters are potrayed by the same actors: Alain Delon & Maurice Ronet. Romy Schneider appears on both films also, although her appearance on "A Plein Soleil" as Freddy's friend is for less than a minute. On "La Piscine" Schneider's character, Marianne, is a key figure for the plot.

Maurice Ronet's character is murdered by Alain Delon's character on these films. On "A Plein Soleil" Ronet plays Philippe Greenleaf, a wealthy American who meets Tom Ripley (Delon) and both live the Dolce Vita in Rome. They travel to Mongibello to meet with Greenleaf's girlfriend Marge (Marie Laforet). However Tom wants everything in Philippe's life, including Marge, and ends up stabbing Phillippe to death when they're alone at sea.

Below a photo that shows Alain Delon, Maurice Ronet, and Marie Laforet having lunch inside Philippe Greenleaf's sailboat. 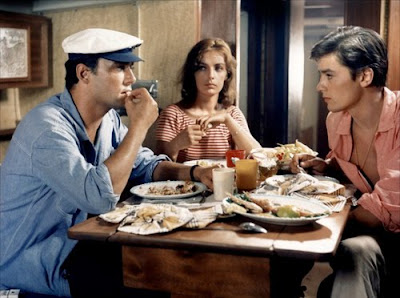 Nine years later, Alain Delon & Maurice Ronet co-starred on "La Piscine", and another murder took place. This time Delon was Jean-Paul and Ronet was Harry. Both men shared a love interest for Marianne (Schneider), yet things got critical when Jean-Paul became interested in Harry's daughter, Penelope (Jane Birkin). The idylic summer holiday in St. Tropez ended up in tragedy when one night, fed up of Harry's ongoing interest for Marianne after several years, and the fact that he was an obstacle between him and Penelope; Jean-Paul has a quarrel with Harry next to the swimming pool. Harry is drowned by Jean-Paul late at night.

A similar photo to the one posted before, we can see a scene from "La Piscine". 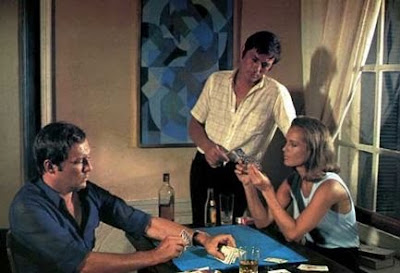 Worth noticing is the fact that "A Plein Soleil" and "La Piscine" have in their titles the location and moment where these crimes that defined their plots take place.

And last but not least, these 2 films are a lesson of Summer style thanks to the clothes worn by Alain Delon, some which have been featured in the blog, and Maurice Ronet such as light colored suits, linen and cotton shirts in dark and light colors, sunglasses, mocassins, and espadrilles.

Posted by RetroVintageModStyle at 12:06 AM No comments:

A walk around Via dei Condotti

Peter Sellers & Britt Ekland were photographed in the Summer of 1967 walking around Rome's Via dei Condotti. Sellers who had achieved popularity by then thanks to roles in "The Pink Panther" movies, "The Party", and "Casino Royale"; was wearing a Safari jacket with a light colored shirt. Britt Ekland, Sellers' wife at the time, opted for a belted/turtleneck cotton dress.

Probably after their stroll around Via dei Condotti, the Sellers decided to rest for a while on the nearby Piazza di Spagna. 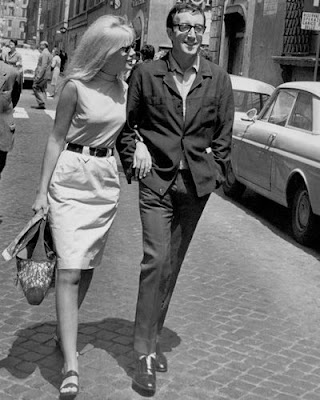 Photo:Mindfood
Posted by RetroVintageModStyle at 12:50 AM No comments:

Terence Stamp is an English actor who besides being among the most talented of his generation, was part of the scene in London during the "Swinging Sixties".

Stamp played the role of "Alfie" in theater back in the 60s and declined to portray him in cinema. Antonioni had originally casted Terence for "Blow Up", but Antonioni decided in the end to cast David Hemmings instead.

In the height of his career Terence Stamp dated the likes of Jean Shrimpton (photographed below with him) & Julie Christie. 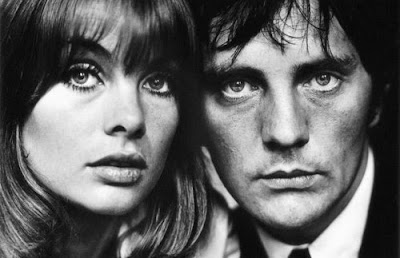 Photo: Flickr
Posted by RetroVintageModStyle at 1:37 AM No comments:

Sinatra & Jobim: Blame it on the Bossa Nova

What do you get when you combine the amazing vocals of Frank Sinatra "The Voice" with the musical genius of Antonio Carlos Jobim "The Father of Bossa Nova"?

The answer is 1967's album "Francis Albert Sinatra & Antonio Carlos Jobim". This album has Sinatra singing Bossa Nova songs which were made famous 5 years before by Jobim and other Brazilian performers such as Astrud Gilberto and Stan Getz. Some of these songs are: "The Girl From Ipanema", "Corcovado", "Meditation", "Agua de Beber", & "How Insensitive". Antonio Carlos Jobim besides accompanying "Ol' Blue Eyes" can be heard singing in some songs.

Their collaboration was a success, that this album was nominated the following year for a Grammy. In November 1967 Sinatra & Jobim teamed up with the legendary Ella Fitzgerald to star in a television special called "A Man and His Music + Ella + Jobim". On this special some songs from "Francis Albert Sinatra & Antonio Carlos Jobim" were performed as well as other hits such as "Going Out Of My Head" & "What Now My Love". 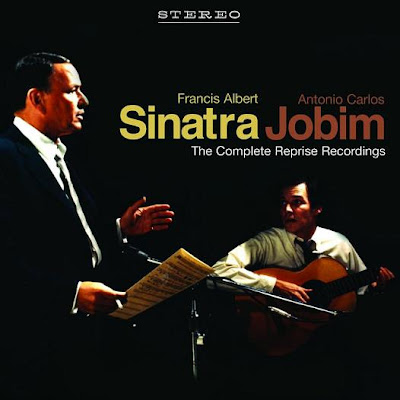