Bruce Lee besides being a martial arts legend, was one of the best dressed as well; as shown by this early 70s photo. 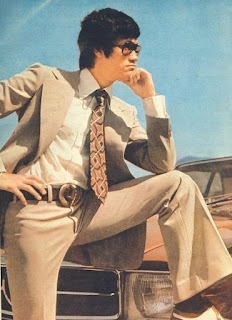 
Tennessee Williams, one of the most popular playwrights history due to works such as "A Streetcar Named Desire" & "Cat on a Hot Tin Roof", was caught enjoying some moments of relaxation in 1958. Worth noticing is Williams' breton stripes jersey. 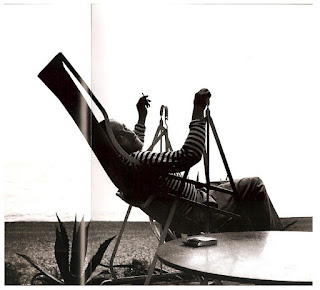 
Sophia Loren, Alain Delon, and Romy Schneider upon their arrival in Cannes on May 1962. For a ride around La Croisette both Sophia Loren and Romy Schneider opted for white/light colored ensembles. Romy was wearing Chanel, as she was the fashion house's face at the time. Meanwhile Alain Delon wore a grey suit, which he would later change  for a white one to attend a lunch at a villa in Cannes later that day. 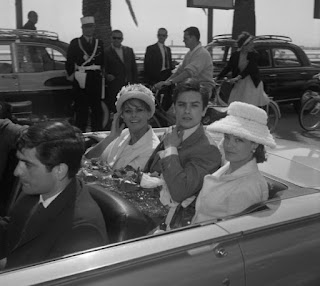 
Sean Connery attended the Cannes Film Festival in 1965 to promote his World War II film "The Hill". As soon as Connery arrived at the Croisette there was a frenzy all over him. Yet he didn't fail to show his English Gentleman patience and elegance.

This year iconic Bond films such as "Dr. No", "From Russia with Love", "Diamonds are Forever", and "On Her Majesty's Secret Service" will be screened at the Festival to celebrate the 50th anniversary of the 007 film saga. 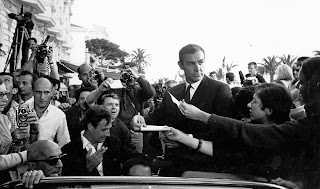 Robin Gibb: Too Much Heaven


5 days have gone by since the sudden and surprising death of music legend Donna Summer, and once again there's news about the passing of another icon, Bee Gees member Robin Gibb. His death has taken by surprise music enthusiasts all over the world because he had shown some signs of improvement during the last couple of weeks.

Bee Gees consisted of the Gibb brothers: Robin, Maurice (2003), and Barry (the only surving member). Their calm and catchy tunes were all over the place during the 60s and 70s. Who can forget "Too Much Heaven", "I Started the Joke", "To Love Somebody", "Run To Me"; and last but not least their contribution to the soundtrack of 1977's "Saturday Night Fever" with songs like "Stayin' Alive", "Night Fever", "You Should Be Dancing", and "How Deep Is Your Love".

For many Disco music was only made up by the likes of Donna Summer and Bee Gees, but although their contribution to Disco and music in general was important, Disco consisted of other acts as well. And it is fair to say that the works of these two artists went beyond Disco as well.

In the 80s, Robin and his brothers continued producing hits and even recorded with the likes of Barbra Streisand and Dionne Warwick. 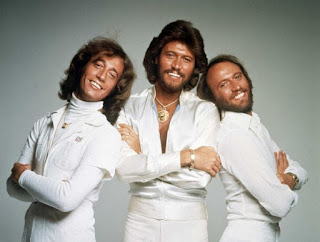 I've decided to make a pause on the lookback at the Cannes Film Festival to pay tribute to one of the most impressive and influential voices in music history.

Donna Summer, "The Queen of Disco", whose music became the soundtrack of the 70s and 80s, passed away at the age of 63 on May 17th, 2012. An unexpected and shocking death to us, her millions of fans worldwide. 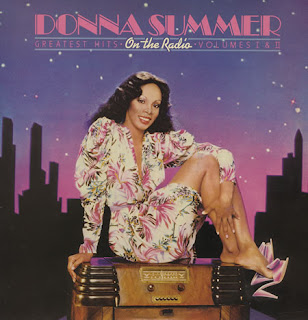 Donna was a living legend, whose voice still reached those high notes although more than 35 years had passed since her debut hit "Love to Love You Baby" in 1975. Summer's pairing with Disco producer Giorgio Moroder delivered to audiences worldwide for decades, even after Disco faded away, hits such as: "I Feel Love", "Could It Be Magic", "Mac Arthur Park", "Bad Girls", "Hot Stuff", "The Deep", "Last Dance", "Heaven Knows", "Our Love", "Enough is Enough" (with Barbra Streisand), and "Try Me I Know We Can Make It", just to mention some and not make it seem like the tracklist for one of her many compilation CDs.

After Disco disappeared in the early 80s, Donna Summer decided to evolve into a more rock-pop sound with hits such as "She Works Hard For The Money" and "This Time I Know It's For Real (produced by Stock Aiken Waterman).

The 90s and 00s were a time where Donna became the subject of many compilation and Disco revival CDs, while she successfully toured worldwide, moving audiences like 30 years before.

Her influence is not only limited to music and being the soundtrack of our lives, Donna influenced fashion as well with her floral print dresses, buttferly sleeves, and floral hairdos.

Below a photo of Donna Summer with Michael Jackson. 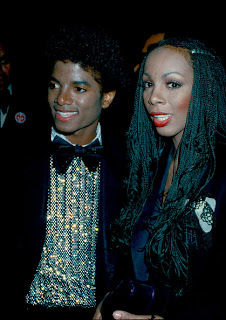 Rest in Peace Donna, you may not be anymore physically with us, but your music and voice will live on forever.

Photos: Tumblr
Posted by RetroVintageModStyle at 12:00 AM No comments:


The 65th edition of the Cannes Film Festival, one of the most iconic and famed film festivals, starts today May 16, 2012.

This year marks the Festival's 65th anniversary, and to commemorate this occasion nothing better than Marilyn Monroe's popular birthday cake photograph. Coincidentally, this August it'll be Marilyn's 50th death anniversary; and an interesting fact: Marilyn Monroe never attended the Festival or strolled through the Boulevard de la Croisette.

Below a photograph of Italian cinema legend, Marcello Mastroianni, who attended 1962's Cannes Film Festival to promote "Divorce, Italian Style" ("Divorzio all'italiana"). Not sure if this photo was taken at the Carlton or Martinez, but one thing is certain, Mastroianni's elegance blends perfectly with the impressive Mediterranean background. 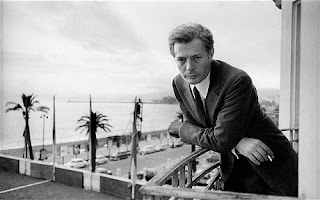 Photo: Telegraph
Posted by RetroVintageModStyle at 12:00 AM No comments:

On the occasion of Valentino's recent 80th birthday, a photo of one of Italy's greatest fashion designers with his models in 1968. Worth noticing are Valentino Garavani's shirt and belt detailing, and of course his creations. 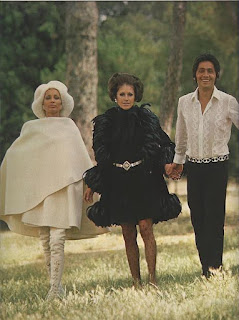 Photo:Flickr
Posted by RetroVintageModStyle at 12:00 AM No comments:


Vidal Sassoon, one of the most important hairdressers in the 60s & Swinging London icon, passed away 2 days ago at the age of 84. Sassoon is best remembered for leading a hair revolution which encouraged easy to manage and handle hair, departing from the traditional salon look.

He became an icon when he created the geometric-wedge shaped bob, like the one he is creating for 60s Mod designer Mary Quant in 1964. Vidal Sassoon also made Hollywood history when he transformed Mia Farrow's hair into a delicate pixie cut for "Rosemary's Baby". 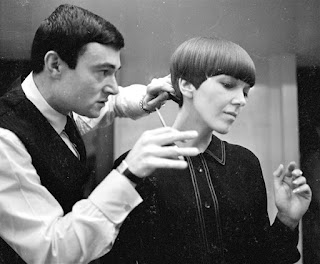 Photo: Msnbc
Posted by RetroVintageModStyle at 12:00 AM No comments:


Another photo of Lois Chiles and Sam Waterston, co-stars of "The Great Gatsby", at the coast of La Romana in the Dominican Republic; taken by Chris Von Wangenheim in 1973. It can't be denied that their ensembles have a "Gastby" influence. 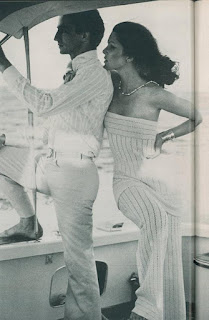 L.G.R Sunglasses has become an icon of Italian eyewear due to the quality, design, elegance, and sustainability of its designs, hand made in Italy by artisans. 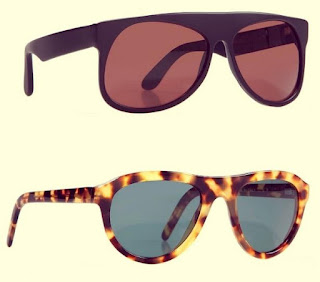 This Spring/Summer L.G.R has released new models such as the Mogadishu and Marrakech with L.G.R Polarized Neophan lenses. What sets apart these lenses is the Neophan layer which filters color for a sharper vision. The Mogadishu model has Vermillon tint lenses which enhance white and yellow color spectrums and amplify depth perception; while the Marrakech’s Aquamarine tint lenses offer a luminous and clear vision. 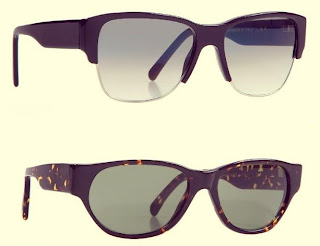 Besides these 2 models, L.G.R is launching the Niger and Pretoria sunglasses (above) and the Namib and Tripoli eyeglasses (below). In fact, the Tripoli is the optical equivalent of their very popular Tripoli sunglasses. 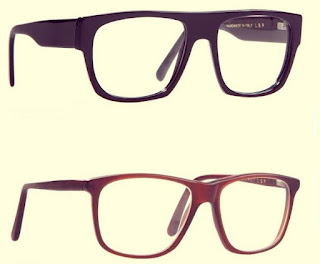 Last but not least, L.G.R Sunglasses has teamed up with A.P.C. and created two unisex sunglass models which will be available in stores this week, on May 10, 2012. 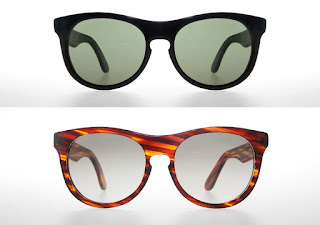 L.G.R Sunglasses can be found in Europe’s top stores & boutiques, and recently in Barneys New York.

Photos: L.G.R Sunglasses
Posted by RetroVintageModStyle at 12:00 AM No comments:


A photo that depicts the scene at a party held during the Swinging 60s in London. 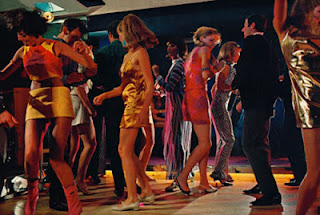 
Brian Jones making a funny face at 1967's Monterrey Festival. This music festival was one of the events that helped defined the culture of the late 60s due to the artists and bands that attended and performed there.

During "The Summer of Love", Jones and many rock icons like The Beatles and The Who, opted to change their style from London's sharp Mod looks to something more ethnic and bohemian such as this ensemble. An eyecatching and colorful ensemble, that is so versatile and can still be worn nowadays. 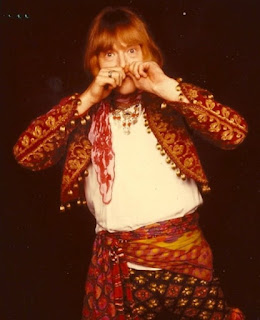